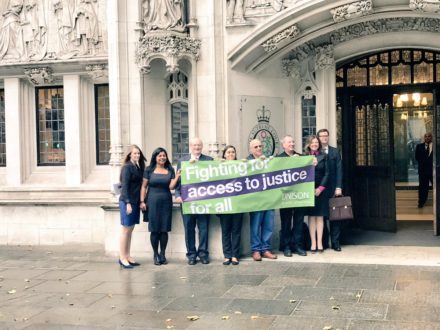 Unison have claimed victory in their four-year long battle against the coalition government’s policy of charging those wanting to take a case up against their employer.

Employees could be faced with charges of up to £1,200 to make a claim against an employer, which was thought to put off those seeking justice. The supreme court unanimously declared the policy unlawful and unconstitutional.

You can read the Labour movement’s responses to the news below:

As a former Employment Tribunal lawyer who saw first hand damage Fees did to access to justice, I’m delighted they’ve been declared unlawful

Amazing victory for @unisontweets in Supreme Court. Employment Tribunal fees are discriminatory and must be reformed. #nobarriers

Jess Phillips, chair of the women’s PLP and MP for Birmingham Yardley, tweeted:

Tribunal fee was a cloud on justice. Glad it will be gone, we should relax 3 month rule for anyone who would have claimed since it existed.

“This is an historic victory. The Supreme Court has ruled that the Conservative government was wrong to deny working people access to employment justice. The Tories’ decision to charge workers more than many earn in a month to be able to pursue an employment tribunal has been a gift to bad bosses.”

“Unite has stood by our members and covered their tribunal costs ensuring that they can get a hearing but it was an appalling decision by the Tories to say that a worker’s access to justice was dependent on the size of their wallet.”

“We congratulate Unison on this victory today because this will now restore some balance to the workplace.”

“However, workers will not forget that this case was only made necessary because the Tory-led government turned its back on workers. The Conservative government is, for sure, no friend of working people.”

Frances O’Grady, the general secretary of the TUC, said:

“This is a massive win for working people. Congratulations to UNISON for doggedly pursuing this case. Today’s result shows the value of working people standing together in trade unions.”

“Too many low-paid workers couldn’t afford to uphold their rights at work, even when they’ve faced harassment or have been sacked unfairly.”

“Tribunal fees have been a bonanza for bad bosses, giving them free rein to mistreat staff. Any fees paid so far should be refunded as soon as possible.”

Sarah Champion, MP for Rotherham and shadow secretary for women and equalities, tweeted:

Liz McInnes, MP for Heywood and Middleton and a shadow foreign minister, tweeted:

Well done UNISON! A stunning victory for UK workers against this Tory Government. Will they still claim to be “on the side of the workers”? https://t.co/wmdAUS74ZT

“As Lord Chancellor, Chris Grayling abused his position to drive through a piece of bullying and vindictive legislation which deliberately denied the most vulnerable and often, the lowest paid workers, access to justice in the event of unfair dismissal by purposefully removing their access to legal aid.”

“Unison has done a great service to workers in chasing him through the courts to hold him to account. The supreme court have found his actions unlawful behaviour and he is therefore simply not fit to serve in public office. He should resign forthwith from the cabinet where he is now transport secretary. And if he can’t resign he should be sacked.”