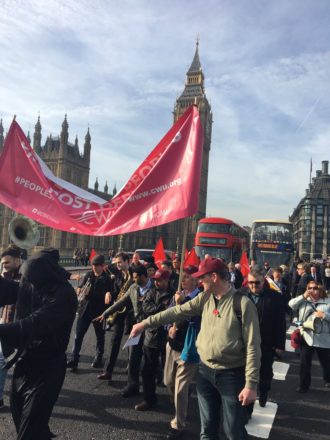 Royal Mail workers in the trade union tied to Momentum have called a two-day strike for later this month.

Members of the CWU, Britain’s fifth largest union, will stage a 48-hour walkout following a major row over pay and pensions.

The industrial action, which is due to begin at 12pm on October 19, is expected to involve around 111,000 workers and would be the first national strike since Royal Mail was privatised by Sir Vince Cable during the coalition.

Today Terry Pullinger, CWU’s deputy general secretary (postal), blamed Royal Mail for the breakdown of talks which began early last year and which have focussed on the corporation’s closure of the final salary pension scheme to new entrants, as well as pay and plans to shut delivery offices.

“It is highly disappointing that after 18 months of negotiations including external mediation that we have reached this point. Royal Mail Group management have clearly moved away from the spirit and intent of our agreements and the empty promises of privatisation, and have suffered a huge vote of no confidence from their employees and CWU members as a consequence,” he said.

“People are extremely angry and will now express that by overwhelmingly supporting this strike action in order to shift Royal Mail Group from their entrenched position, protect themselves and this great public service”.

Earlier this week the union announced the results of a ballot of its Royal Mail members showing a huge 89.1 vote for strike on a 73.7 per cent turnout, which easily passed the new threshold for industrial action under the Tories’ hated trade union act.

The CWU agreed to affiliate to Momentum in August.