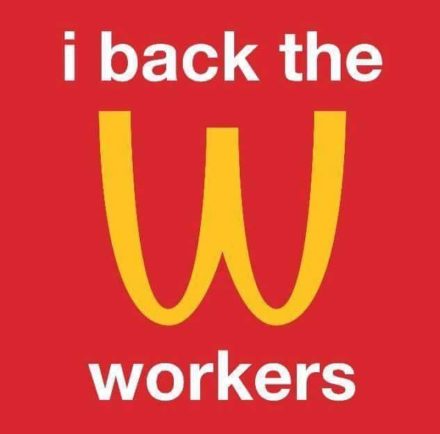 The front line of our Labour movement is not the frontbench, it is the thousands of workers involved in industrial disputes across the country. While Labour is yet to form a government, there are still ways we can achieve some of Labour’s manifesto pledges in the meantime. One of those ways is industrial action. We may be out of power electorally, but our movement maintains power in our workplaces.

Our unions were previously thought of as the “embarrassing uncles” of the Labour party. But now our shadow chancellor stands with workers on picket lines week to week. From the recent BA cabin crew strike – the longest in aviation history – to the young McDonald’s workers blazing a trail for security at work in Britain’s fast food industry. We have a Labour leadership which recognises that standing with workers is a duty, not a shame, and now we need our membership to get behind those actions, too. Often trade union membership and campaigns are an afterthought locally. We profess solidarity, yet we still see people only mention unions for the purpose of their candidacy.

Tuesday saw members of more than 15 trade unions march to demand a pay rise. Across the country, workers are also walking out – smaller in number but even braver in resolve – withholding their labour to fight for just that: decent pay and fair working conditions. This week alone, bus drivers, bakery workers, firefighters and staff at Capita have all announced or threatened strike action. I see few friends in the Labour Party sharing notices of disputes, offering words of solidarity, or showing up to support a picket. There are some which have garnered support from the wider movement this year, including the inspiring Picturehouse strike by cinema workers fighting for a living wage, but it is not at all representative of the diversity of workplaces where important struggles are taking place.

I often hear how local Labour meetings can turn people off and be too inward-looking, that they don’t discuss political issues. It seems to me an oversight that the fights taking place across the country, and the workplace activists leading them, are an untapped resource and an often forgotten cause. We sometimes become so bogged down with internal structures that we forget the bigger picture of what is going on just streets away. This week the CWU’s postal workers in the Royal Mail were due to strike over pensions, jobs and services; for which they won a 90 per cent yes vote. Royal Mail shamefully dragged the union through the courts, and secured an injunction to delay the strike. I urge you to watch the video of the union’s initial reaction, and consider this delay as a window of opportunity for our Party locally to show support for this dispute.

Our enlarged membership has invigorated Labour’s local parties and, combined with our manifesto, was a large part of why we won more seats in June. Why not channel the energy used to knock on hundreds of thousands of doors in the last election to also populate picket lines and mobilise demonstrations in our towns and cities? By proving that we can collectively win £10 per hour and trade union rights at a local level, we will strengthen support amongst the public when we offer it again at the next general election.

Next time a local dispute happens, local Labour parties should consider inviting a union rep to speak, raising money for a strike fund, and sending a delegation to their protest. Each CLP could send an observer to local Trades Council meetings to keep in touch with disputes locally, and encourage all members to join a union themselves. As Jeremy Corbyn said as he addressed the Trade Union Congress conference last month: “the most important thing any worker can do is to join a trade union.”

Labour’s leadership are some of the first to recognise the importance of those at the forefront of fighting for better working conditions for us all, and we need our wider Party to respond with real, tangible action. It is only a matter of time until we elect a Labour government at the ballot box, but until then we must work together towards increasing union membership and fighting for labour movement victories in every workplace: it is what our party exists to do.

Shelly Asquith is Trade Union Co-ordinator in Cities of London and Westminster CLP, and a member of the Peoples’ Assembly national committee.