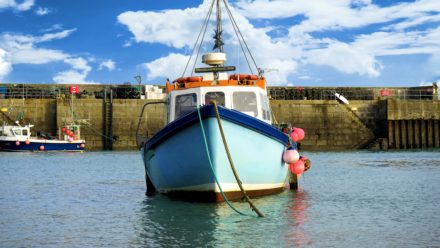 I’m continually amazed by the way Michael Gove captures the headlines with big promises and frequently gets away with delivering absolutely nothing. Ever since the EU referendum, he has fed the UK’s fishing community a constant diet of grand promises for starters but measly portions of betrayal and delay for the main course. His Fisheries Bill offers more of the same, and it’s time we called it out for what it is.

As Labour’s shadow fisheries minister, it’s my job along with our excellent Shadow Environment Secretary, Sue Hayman, to hold Gove to account and seek to improve the laws he is haphazardly dragging through parliament.

Fishing and Brexit are interwoven, with the industry being the poster-child of the leave campaign. The industry’s very valid grievances with the Common Fisheries Policy chimed with those who believed we could take back control of our waters in the referendum. It’s a growing industry supporting thousands of jobs in fish handling and processing, but also with a knock-on effect on the economic health of coastal communities up and down the country.

But the debate around fishing isn’t just about fish – it’s about identity. I represent Plymouth and we have a thousand jobs in fishing in the patch I represent. But for those who don’t work on the boats or on the quayside, the politics of fishing is about control, independence and autonomy.

Though it has improved considerably, the EU’s Commons Fisheries Policy is not the best advert for European integration. Labour is honest and upfront that the CFP has not delivered for our coastal communities and whatever happens with Brexit, those communities, often the ones hit hardest by Tory austerity, deserve a better deal.

That’s why the promises made to fishing and our coastal towns need to be kept by Tory ministers. Arch-Brexiteer Michael Gove has walked the fine line of being a Brexit rebel and staying in cabinet, but in so doing he has tried to appear to be all things to all people. Last year, Michael Gove and junior fishing minister George Eustice gave gold-plated promises that fishing would be excluded from the Brexit transition, only for that promise to be reneged upon.

The Fisheries Bill offers the same old reheated promises to ‘take back control’ of our waters and for the UK to be an independent coastal state. But there are huge gaps between the rhetoric and the reality of what is on offer. Theresa May’s dead-in-the-water Brexit deal and future political relationship proposals offer little for British fishing. Promises to take back control of our waters look hollow when the PM is signing up to the very opposite. Fishing is being betrayed and let down and it will be coastal towns neglected behind by this government who stand to miss out.

As a nation, we export around 80% of the fish we catch and import 70% of the fish we eat. Having more fish will only be worth it if we have markets to sell them in to. I’m all for more fish but without frictionless, tariff-free access to the EU single market, there’s the very real danger of fish rotting at our border awaiting export.

If we are going to have access to more fish, we need proper investment to support our coastal communities up and down the country. For every job at sea there are 10 jobs on land. The opportunities if we do this right are immense. But this bill gives little assurance the government will match the money we got from the EU, let alone invest more. That’s why we are tabling amendments to make sure more fish is landed in UK ports to create jobs.

It is not sufficient to have only a critique of ministers’ broken promises. Labour must have bold alternatives, and that is what the shadow DEFRA team have been working hard to deliver. Our amendments to the Fisheries Bill are designed to uphold the environmental standard of Maximum Sustainable Yield, improve safety standards for workers, promote skills and training and increase the number of co-ops in our fishing industry.

Labour wants to reform the quota share for new and existing fishing allocating quota based on progressive social, environmental criteria. Such criteria would stand to benefit small boats, the backbone of British fishing that make up 49% of employment in the catching sector but only have around 6% of fishing quota. They’re the SMEs of fishing and they’ve been ignored for far too long.

As a former target seat candidate, I know that sometimes the debates in Westminster bear little relation to the concerns of voters in marginal seats. Not so with fishing. If we are to put Jeremy into Number 10 and elect a Labour government, we must make headway in our target seats in coastal communities from Cornwall to Kent, Wales to Scotland.

So, this is my ask of you: help spread the word that Labour is listening to fishing communities and to coastal towns that feel left behind. We want to support those small boats and SMEs who often risk their lives to catch our dinner but are poorly rewarded by the current system under this Tory government.

The Conservatives have made grand promises to the fishing industry and beyond to voters about taking back control. That’s not what the Fisheries Bill delivers and it is not what Theresa May’s bad deal delivers either. Labour has a plan for fishing that will help the many, not just the rich few who control industrial fishing in our country. Every new broken Tory promise over fishing reinforces the self-evident truth that Labour really is now the party of fishing and our coastal communities.

Luke Pollard is MP for Plymouth Sutton and Devonport and shadow environment minister with responsibility for fishing, flooding, water and coastal communities.