I am a socialist, and a lifelong activist against war, imperialism and racism.

My opposition to antisemitism is central to this, as is my belief in justice for Palestinians. As a Muslim woman, I stand in unshakeable solidarity with the Jewish community against the racism we face. The hate-driven killers at the mosque in Christchurch and the synagogues in Pittsburgh, Poway and Halle attacked us – as Muslims and as Jews – because we are the “easy targets” when the disease of racism spreads in society.

And I’ve witnessed some individuals, under the cover of the Palestinian cause, stray into perpetuating antisemitic narratives, by sharing conspiracy theories about Israel or Zionism, which recycle historic tropes about Jewish people. I support the discussions, which are now taking place across the Palestinian solidarity movement to ensure that the struggle to end the oppression of Palestinians does not simultaneously oppress our Jewish brothers and sisters. It is important that all our social justice movements examine the intersection of race, class and power dynamics in all our causes.

I have a long record of challenging antisemitism within campaigns for Palestinian rights. For example, I wrote an article in 2006 urging the Muslim Council of Britain to stop boycotting Holocaust Memorial Day in protest against Palestinian oppression. I am pleased they have attended ever since. I have always advocated Muslims and Jews working together to tackle racism, and I work with local Jewish community groups in the West Midlands, where we have an excellent history of close co-operation campaigning for equality, justice and unity.

However, I have made comments that have caused offence and that I need to clarify.

In 2013, I tweeted an article headlined “Iceland arrests 10 Rothschild bankers” on the indictment of senior executives at the Icelandic bank Kaupthing, because my attention was drawn to a rare example of bankers being punished for the 2008 financial crash. The Rothschild & Co bank had nothing to do with this incident and the article I shared is a classic example of the Rothschild name being falsely implanted in news stories to further the myth of Jewish financial control. The absurd fiction that “the Rothschilds” control all the banks or have funded all the world’s wars was spun by the Nazis just as it is by fake-news websites today.

I had not realised the source of the article was in fact from a far-right website. It also claims that Islam and terrorism go hand in hand and paints Obama as a Muslim Brotherhood puppet. I would of course never deliberately promote such a website, or deliberately spread Islamophobic or antisemitic conspiracy theories. Whilst it was an honest error on my part, caused by carelessness not malice, in one tweet using a poor source, I understand the hurt caused by people spreading such tropes and sincerely apologise for that.

Speaking at a rally in May, I used the phrase “lipstick on a pig” to describe how Israel’s hosting of the Eurovision contest could be used to whitewash its human rights abuses. I used the phrase as an English-language idiom in specific reference to the glossy event being used to mask the suffering of Palestinians. It is wrong to claim my use of this phrase meant I referred to Jews as pigs. In both Islam and Judaism pigs are considered ritually unclean. I assumed that because I, as a Muslim, was not offended by this phrase, that others wouldn’t be either. I should not have made such an assumption and I apologise for doing so.

In the same speech I mentioned European colonisation, referring to the 1917 Balfour Declaration and the subsequent dispossession of Palestinian people before the Second World War. I was absolutely not labelling Jewish people who fled the Holocaust as European colonialists. I had no intention of detracting from the importance of Israel being considered a place of safety for Jewish people after centuries of persecution across both Europe and the Middle East. I acknowledge that Israel is central to the identities of many British Jews, while for many Palestinians the events surrounding Israel’s foundation, and ongoing occupation, are a source of trauma and suffering. These are complex issues that must be treated with sensitivity and understanding, which I am committed to doing.

I have also been criticised for having once shared a political party with George Galloway. It is a matter of public record that I resigned from Respect in 2012 because of my opposition to many of his views. Furthermore, I, and many other Labour supporters, are confounded and repelled by many of his words and actions, including him recently greeting the far-right ideologue and white supremacist Steve Bannon who has promoted ideas that have emboldened Islamophobes, antisemites and racists around the world.

Finally, I am personally committed to being open to learning from any instances where I have caused hurt or offence, and I want to continually learn from all marginalised communities about the misrepresentations and barriers they face so that I can be a true ally. I look forward to working with my Jewish brothers and sisters to win the West Midlands for Labour and transform our region in the best tradition of ‘tikkun olam’.

Further reading from the other shortlisted West Mids candidates…

Liam Byrne: Let’s make the West Midlands a region of sanctuary for refugees 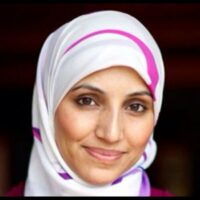 View all articles by Salma Yaqoob