A record number of people – 659,666 – registered to vote in a single day ahead of the general election next month, as electors rushed to submit applications before midnight.

The latest figure has brought the total number of registrations up to 3.85 million since the general election was called on October 29th, when MPs voted in favour of a snap poll.

The previous record for the most people signing up to vote in a single day was during the lead up to the 2017 election, when 622,398 applied. 485,012 people applied on the deadline day for the 2015 election.

Labour-backing campaign groups encouraged voters to sign up via online videos and messages. Momentum said it persuaded more than 120,000 people to register through Facebook alone. Of the total registrations completed on the closing day, 97% were made online.

Among the 122,900 people signed up through the Momentum’s Facebook ad, more than 100,000 were under the age of 35 and they were almost all in marginal constituencies. There are 50 seats in the country with majorities of less than 5,000.

Laura Parker, Momentum’s national coordinator, said: “People of all ages who have never voted before now have a reason to. They have a chance to break with nine years of the same old Tories running the country into the ground by voting for real change with Labour. December 12th could be the date of the biggest establishment upset in British political history.”

Momentum produced videos to engage young people in the marginals, including “We Don’t Want Your Vote” and “Please Don’t Vote”. The first was viewed on Facebook more than 1.2 million times. The highly shareable clips encouraged people to vote, promoting links to the registration page, and criticised compulsory voter ID laws.

37% of the people who have registered to vote since the election was called on October 29th are under the age of 25, while another 30% are between the ages of 25 and 34.

Polling between November 12th and 20th suggested that Labour has an advantage among young voters. It showed that the party had increased 13 percentage points amongst 18- to 29-year-olds since the start of October, rising from 38% to 51%. In comparison, only 20% of this age group said they would vote Tory.

The poll also indicated that 41% of those aged 30 to 39 would vote Labour, falling to 32% for people between the ages of 40 and 49. The proportion for the Tories in these age groups correspondingly rose to 28% and 37% – with the Conservatives strongest support found at 66% among those aged over 70. 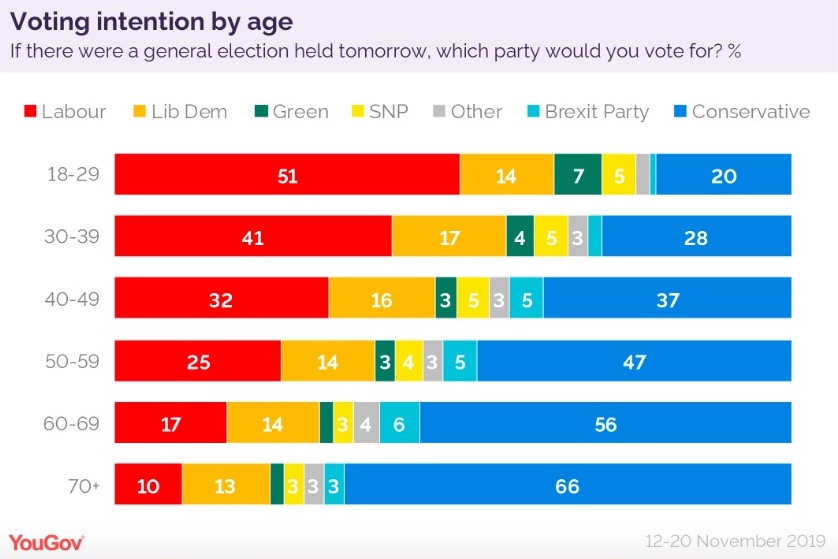