81% of the British public are in favour of people being able to suspend rent or mortgage payments during the period of the coronavirus pandemic, according to a new poll.

In the research published by Survation today, 69% of those who supported such a suspension felt that the money should be recompensed after lockdown, compared to 24% who opposed repayment.

Labour under its new leader Keir Starmer advocated rent deferrals earlier this month, which would require renters to make additional rent payments to cover the arrears accrued during the crisis.

Some within Labour are arguing for the party to back rent cancellations, without the need to pay back arrears – several thousand Labour members signed an open letter to Starmer to this effect.

Survation also questioned respondents about easing immigration requirements for key workers, bailouts for airlines and their satisfaction with how the government has handled the crisis.

A majority of people – 55% – rejected airline bailouts, and 72% of those who did support rescue measures thought that the public should hold a share of the companies that receive financial assistance.

Labour has put forward proposals for a bailout of companies in the aviation sector, but said that these should be conditional on environmental commitments and the protection of jobs.

On immigration, 38% favoured the introduction of easier entry requirements for all key workers – compared to 20% that wanted to make it harder and 35% who thought that the UK should maintain the current rules.

Support for easing immigration requirements rose when respondents were specifically asked about health and care workers to 42%, and again to 48% when referring only to NHS workers.

The government’s immigration bill has just passed its second reading in the Commons and would enable ministers to introduce a salary requirement of £25,600 – as Labour has pointed out, this is more than many key workers earn.

The Home Secretary Priti Patel has insisted that the government’s legislation is “not about a salary guide” and instead argued that it is about skills and “creating a level-playing field”. 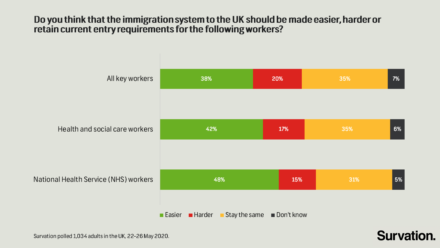 This research from Survation follows polls earlier in the week that show a sharp drop in support for Boris Johnson and the Tories, and comes amid the ongoing row over the actions of senior Tory adviser Dominic Cummings. 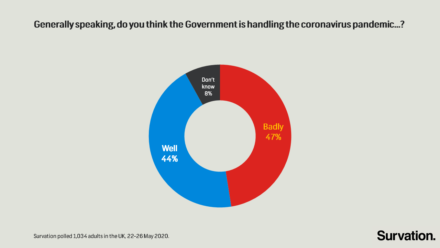