As a leading contributor to the UN budget, and one of only five permanent members on the Security Council, there are few member states able to levy as much influence as the UK. Yet as the world casts an eye to the most vulnerable for Refugee Week, the government has offered little more than kind words.

There is no single initiative that could have provided greater immediate safety for refugees and internally displaced people than the global ceasefire campaign, launched by secretary-general António Guterres in March. His call centred on the idea that as the threat of the pandemic consumed world leaders, there was an opportunity for warring parties to cast conflict aside so that they could focus instead on protecting their people from the coronavirus. “The fury of the virus illustrates the folly of war,” he said.

The first hurdle was the Security Council, and the usual battle lines were again drawn. Repeated drafts were laid but it soon became clear that there would be no end to the illogical, and frankly incoherent, infighting. Both France and Germany produced resolutions in an attempt at finding compromise. The UK remains largely silent and absent.

The UK has been similarly absent on other initiatives. The displaced people of Syria are among the most desperate. Almost six million people have fled Syria in the last decade. Those who have remained live in a country where many healthcare centres and hospitals, schools, and basic are damaged or destroyed. Eight million Syrians lack reliable access to food, and over four million rely on cross border operations to receive humanitarian assistance. Yet if cross border operations are not renewed and extended, the impact on our humanitarian response in the region will be catastrophic.

In the Lords, I have raised the urgent need for an additional border authorisation in north east Syria. In response, the minister could only tell me that he hopes this will happen. When Labour’s shadow international development minister Anna McMorrin wrote to the Secretary of State demanding priority action, it took over a month and a chasing letter before a reply was sent. The UK has the influence step up and drive the renewal of the necessary UN resolution but it seems there is no appetite within the government to do so.

Since violence broke out in Yemen five years ago, millions have fled their homes and approximately 80% of the population are in desperate need of humanitarian help even before Covid-19. The international community has not stepped up and a funding crisis threatens 30 out of a total of 41 major UN programmes operating in the country. To its credit, the government have made a contribution to help close the shortfall, but when some of the key actors in the conflict are refusing to follow suit, the UK should wield our influence to hold their feet to the fire.

The United Arab Emirates, for example, have ignored the funding drive, despite their previous involvement in the war. Saudi Arabia, meanwhile, has made a recent pledge but almost half will be spent by the King Salman Centre rather than the UN. UK aid alone will not be enough to support the UN’s work in Yemen, but the government should be using our standing to encourage others to contribute.

The UN is not always as effective as it could be in response to the crises and threats facing the world, and I am pleased to be asked by Labour’s Shadow Foreign Secretary Lisa Nandy to develop a review of proposals for the reform of the institution. But regardless of the UN’s shortcomings, international cooperation is the greatest tool we hold to confront suffering, and there are few more powerful mechanisms for the UK to help the world’s refugees. The UK holds enormous influence, and if only the government felt able or willing to, we could provide real leadership for refugees.

This article is part of a series on international development starting on Refugee Week. LabourList will be in conversation with Preet Kaur Gill on Thursday, June 18th, at 6pm. 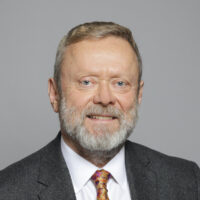 Ray Collins is a Labour peer who was general secretary of the party from 2008 to 2011. He currently undertakes the roles of Lords opposition whip, and shadow spokesperson on international development, foreign and commonwealth affairs and equalities.

View all articles by Ray Collins