It is nearly two years since our last elections, and much has changed. Theresa May was Prime Minister, our parliament was gridlocked with Brexit and we had never heard of Covid-19. Since then, Labour has badly lost a general election and other elections were postponed. This year’s contests are crucial and can be Labour’s first step back to power in 2024.

Police and crime commissioner elections are being held for the first time in five years. These are hugely important. With the police now under immense pressures, this will be the public’s first opportunity to show what they think about the Conservatives’ defunding record on police and crime. But Labour is still to fully embrace PCCs.

They were a coalition invention in 2012. They are a cheaper and more democratic system than the old police committees that proceeded them. They are a current reality. The arguments for embracing them, and throwing our weight behind these elections, vastly outweighs any disapproval we might have for these roles.

Many people do not understand the role of a PCC, though it is a hugely influential one within our communities and has the potential to champion our values. The PCC is the voice of the people with their police. They provide scrutiny of the chief constable; they offer leadership and work on setting priorities for the police with the chief constable.

They should stand clearly for social justice, fairness and equity and equality. They should protect the vulnerable in society; support communities to be strong, secure, and resilient; ensure rights are matched by responsibilities; make sure our police do their bit to protect the environment; protect and stand up for victims. Does this ring any bells? It should do. We need people with Labour values in these roles.

Not to vigorously contest these contests would be a godsend to the Conservatives. By campaigning hard in these elections, in an area where the Conservatives have such a poor record, we can bolster our support across the board. Investing in and working with a high-profile, county-wide PCC candidate can really help our councillors and candidates win in real battleground wards over a wide area. Supporting our candidates in PCC elections is great value politically.

Due to the unique nature of these elections, different and exciting outcomes are possible. As the Greens and other left-of-centre parties are not standing, Labour will be the only left-of-centre party. There are usually one or more independents and many have won in the past, but Independents are more likely to take votes from the Conservatives. These elections are also being held under a ‘supplementary vote system’. Effectively, if the anti-Tory vote is sufficient, different results are possible.

Finally, turnout for PCC elections is historically low. Partly, perhaps, because Labour has never really supported them. That suggests that if we do mobilise the wider Labour vote in May, we can win in unexpected places and even traditional Tory areas. Just think what panic that would cause.

The Tories have nowhere to run regarding their record on the criminal justice system. Particularly on police and crime. They have defunded, privatised, run-down, cut and demoralised much of our criminal justice system, and it is having very real effect on people’s lives and futures. Police morale is at an all-time low and experienced officers are leaving in record numbers. Even lifelong Tories are disillusioned with this.

This is an area in which we should be campaigning hard, as it relates to what we’re about and gives us a platform to take the fight to the Tories on a national scale long before 2024. So, embrace and support your local Labour PCC candidate – it will be worth it. 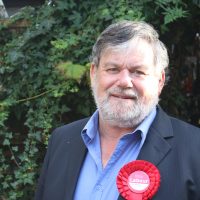 Tony Bunday is the Labour and Co-operative Party candidate in the Hampshire and Isle of Wight police and crime commissioner election.

View all articles by Tony Bunday