Labour’s new Shadow Justice Secretary Steve Reed has claimed in a Mirror interview that Labour under Jeremy Corbyn “cared more about criminals than their victims”. He praised Tony Blair’s ‘tough on crime, tough on the causes of crime’ slogan, yet it apparently escaped him that the same mantra appeared on page 82 of Labour’s 2017 manifesto. He and I can agree that there is something to that approach to criminal justice. But where New Labour went wrong – and where Reed also risks going wrong – was by focusing too little on the causes of crime.

It is the default setting of Labour justice and home secretaries to strike macho poses when talking about issues of law and order. It is easy and requires little serious thinking. What a would-be Labour government should be sketching out is a radical policy on criminal justice, rather than reverting to the usual hang-em-and-flog-em rhetoric of old. This is particularly the case for a Labour Party led by Keir Starmer, who understands well the ingrained and long-term failings of our existing criminal justice system.

Shaping such a policy would require an honest and serious analysis of crime, rehabilitation and sentencing. But too often, this seems beyond our politicians. MPs regularly promote private members’ bills that dream up new offences, with the only real purpose of gaining publicity for that MP. Labour should be considering the decriminalisation of certain drugs, examining the effectiveness of short prison sentences, and committing to investing more into probation.

Most people who end up in prison will be released one day. They need proper support and advice to avoid returning. That is just good sense and not, as Reed might have it, “trying to excuse what they’ve done”. Reed doesn’t want to “over-focus on the things that have happened in people’s lives that lead them to offend”. But the issues I see in my work that are most associated with people’s offending are poverty, drug addiction and homelessness. Understanding that is not to excuse offending but is the means by which you have a chance of addressing it. And these are the sorts of societal ills that the Labour Party has always sought to eradicate.

Reed also wants to see the introduction of ‘pop-up’ courts and the continued use of temporary Nightingale courts to clear the huge backlog of cases. Necessary though such courts have been during the pandemic, they are no substitute for dedicated court buildings with proper facilities. Labour needs to review the long list of court closures that took place under the Tories in the last decade. Before Covid, the backlog of cases was still at an unacceptable level – and temporary measures will do little to improve things in the long term.

Many of these problems will only be cured by proper investment into the criminal justice system: into failing prisons and their staffing numbers, the probation service wrecked by Chris Grayling, and the court estate. And – always a popular cause – into the fees we lawyers are paid. The myth of the fat cat legal aid lawyer is a false though persistent stereotype. Fees in criminal legal aid have remained stagnant for over 20 years, and during the pandemic more and more lawyers have left the profession altogether.

Sir Christopher Bellamy’s Independent Review of Criminal Legal Aid report was recently published. He called for a “substantial increase” in funding for lawyers working in the criminal justice system in order to ensure the supply of barristers and solicitors is sufficient to meet the demand for services. Surprisingly, Reed did not mention the review in his interview. To date, Justice Secretary Dominic Raab has made no commitments, and the threat of criminal barristers taking industrial action looms. Rather than stay silent, Labour should be siding with the lawyers who keep the system going as it crumbles around them.

For 40 years in England and Wales, prison sentences and populations have only increased. There is no risk any time soon of failing to be ‘tough on crime’. However, for many in the criminal justice system, theirs is a cycle of prison and release for which no effective remedy exists – either for them or for wider society. To be tough on the causes of crime requires a genuine commitment to finding that remedy. 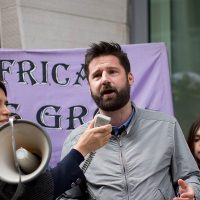