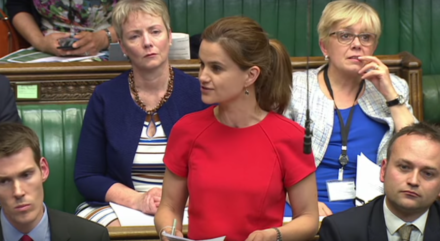 Labour MP Jo Cox is in a critical condition in hospital after being shot and stabbed in a street near Leeds.

The Batley and Spen MP was attacked outside Birstall Library at lunchtime.

Cox, who was elected to Parliament last year, was holding a constituency surgery at the library, the Yorkshire Post reported. Early reports suggested the attacker shouted the words “Britain First” during the assault.

Armed police swooped on the area, where one middle-aged man also received injuries.

A 52-year-old man was been arrested in relation to the incident nearby.

This afternoon a spokesman for West Yorkshire Police said: “At 12.53 today, police were called to a report of an incident on Market Street, Birstall, where a woman in her 40s had suffered serious injuries and is in a critical condition.

“A man in his late 40s to early 50s nearby also suffered slight injuries. Armed officers attended and a 52-year-old man was arrested in the area.”

Police have stepped up patrols in a bid to reassure local people.

Jeremy Corbyn has said the thoughts of the “whole Labour Party” are with her and her family.

Utterly shocked by the news of the attack on Jo Cox. The thoughts of the whole Labour Party are with her and her family at this time.

Maria Eagle has added her concern, re-tweeting reports the attacker shouted “Britain First” before the assault.

The pro-EU campaign Britain Stronger in Europe suspended campaigning and Vote Leave is thought to have taken the same decision.

Cox is co-chair of the all party parliamentary group on Syria. She abstained in last year’s vote on whether Britain should bomb the war-torn nation. She set out her views on Syria and Iraq in a LabourList article in October.