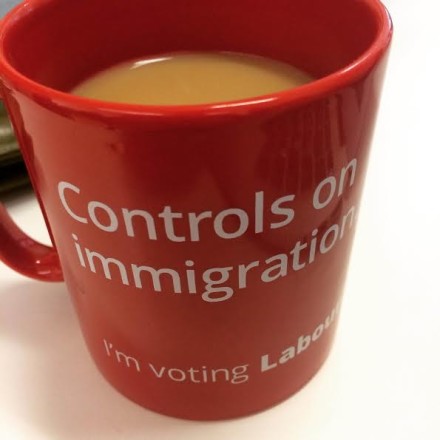 Whether the UK leaves the EU or not, this country’s problems won’t be solved by clamping down on immigration. Certain Labour politicians calling for “controls” on EU migration should think twice.

It’s a callous strategy, which ignores social and economic realities; a self-defeating one, which feeds UKIP’s flames; and it’s likely to be unachievable. Jeremy Corbyn knows this and that’s why he’s right to defend free movement of EU migrants.

The Leave campaign is throwing immigration into the debate at every chance they get. According to them, immigrants are responsible for a lack of housing; an underfunded NHS, that’s barely managing to keep up with patients’ needs; and successive governments’ failures to invest in industry, create stable jobs and increase productivity.

None of this is true; people from abroad actually make innumerable positive contributions to this country. But the barrage of anti-immigration messages is constant nonetheless.

The anti-immigrant narrative is well entrenched that one in three people think immigration is a bigger issue in the referendum than the economy. At the same time, facts about immigration fall by the wayside; two years ago British people thought on average that immigrants made up 24.4 per cent of the population when it was really around 13 per cent. No surprise, then, that it tends to be in areas of low immigration that UKIP do best. Perceptions of immigration, and fear of change and difference, is often at the heart of the immigration ‘debate’.

People are afraid but they’re also tired of the rewards capitalism promises coming to little. Politicians capitalise on the despair they’ve had a hand in creating, directing blame towards immigrants in an attempt at dividing society. The aim: to deflect attention away from their own damaging policies.

Immigration was nationally one of the issues at the forefront of voters’ minds well before the torturous EU referendum campaign. What this “debate” is doing is highlighting how easily some politicians give in to anti-foreigner rhetoric. At the forefront of the Remain campaign, David Cameron barely bothers to refute senseless stereotyping. “If we don’t leave the EU, millions of ‘Turks’ will come to steal your jobs”, cry Farage and co.

While certain Remain campaigners point out the ugly racialised tone of this line, too often the response from others is: “Don’t worry Turkey won’t join the EU any time soon”. Little does it matter that Turkish people aren’t somehow predisposed to criminality, that millions of people from this one country probably don’t want to come to live in the UK or that the world would not end if Turkey did join the EU. The national conversation about immigration is a mess.

In the past two days, some Labour figures have joined this chorus of voices, seeming to lend support to the idea that there should be controls on freedom of movement for EU migrants. It’s time to get out your “Controls on Immigration” mug. Politicians floating these ideas have barely moved on from last May’s ill-advised, unsuccessful strategy. This is a policy Cameron couldn’t secure in the EU renegotiation and, even with the full weight of a Brexit threat behind him, the chances of it happening a slim. Never mind to what end. That doesn’t really matter; the anti-immigration posturing is what’s of the utmost importance to politicians here: the message that they too think immigration is a “problem”.

As ever, proposals like this spring from unjustifiable assumptions that people who come to this country from abroad are causing the UK’s problems, which are actually a direct result of governmental policy. With their support for “controlling immigration” what these politicians are doing is reinforcing negative stereotypes; telling a section of people already wary of the Labour Party’s history on immigration that this country has too many “foreigners”. Not only is that untrue, it’s likely to be ineffective – just as it was last May. These voters are unlikely to trust Labour to deal with immigration and so they’re pushed into the arms of UKIP or the Tories (although that’s arguably dependant on who’s at the helm of the party).

At times, politics is about taking prejudice head on even when it’s unpopular. For Labour, that means setting out a pro-immigration stall and challenging negative stereotypes. That does not mean ignoring or dismissing peoples’ worries and anger as irrelevant or telling them they have to put up with life as it is. What Labour need to do is outline ways to make this country equal – including, as they are doing, calling for an end to the exploitation of people from abroad – without scapegoating immigrants. You can recognise and listen to fear while trying to dispel myths: the world doesn’t exist in binaries.

After years of politicians blaming increasing levels of social and economic uncertainty on immigration, it’s no easy task. Labour has to address reality and repeat loudly and clearly that closing the UK’s borders won’t solve our problems.