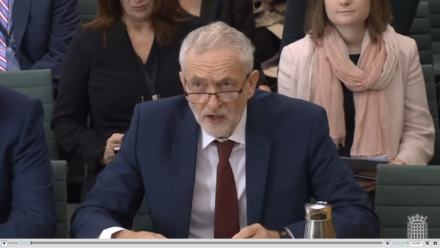 This is Jeremy Corbyn’s full response to the report on anti-Semitism within the UK published today by the Commons home affairs select committee.

“Antisemitism is an evil, which led to the worst crimes of the 20th century. Every one of us has a responsibility to ensure that it is never allowed to fester in our society again.

“So we must all be concerned when we hear that antisemitic incidents are on the rise again.

“Last week I spoke at the 80th anniversary commemoration of the Battle of Cable Street and was privileged to meet some veterans of it. And I had hoped that the Home Affairs Committee report ‘Antisemitism in the UK’ would offer all of us some guidance on how we can take forward the fight against antisemitism.

“I welcome some recommendations in the report, such as strengthening anti-hate crime systems, demanding Twitter take stronger action against antisemitic trolling and allow users to block keywords, and support for Jewish communal security.

“I will be writing to both Twitter and Facebook to request urgent meetings to discuss tackling online abuse.

“The report in fact echoes much of Labour’s own Chakrabarti Inquiry report, including recommendations on language, stereotyping and training.

“However, there are some important opportunities lost. The committee chose not to look in any detail at – or come up with proposals for – combatting antisemitism in other parties, our major civic institutions, in the workplace, in schools, in all those places where Jewish people’s life chances might be at risk through antisemitism.

“In the Labour Party, which has been at the forefront of those struggles for equality, we remain committed to doing so. We continue to work with Jewish and other organisations in that endeavor, and are saddened that those on the Committee have chosen not to contribute to it.

“The report unfairly criticises Shami Chakrabarti for not being sufficiently independent. This fails to acknowledge public statements that the offer to appoint Chakrabarti to the House of Lords came after completion of her report, and was based on her extensive legal and campaigning experience.

“Commissioning Chakrabarti was an unprecedented step for a political party, demonstrating Labour’s commitment to fight against antisemitism.

“Labour is already acting on her recommendations, including reform of our internal procedures, changes to the Party’s rule book and expansion of training to tackle antisemitism.

“The Inquiry, which included Baroness Jan Royall, former leader of the House of Lords, and David Feldman, Director of the Pears Institute for the Study of Antisemitism on its panel, was praised by a number of bodies, including the Jewish Labour Movement, and by John Mann, the Chair of the All Parliamentary Party Group against Antisemitism.

“I am proud that Labour is the only party that has specific protections in place to ensure a zero tolerance approach to antisemitism.

“I am also concerned by some other aspects of the Committee’s report. The Committee heard evidence from too narrow a pool of opinion, and its then-chair rejected both Chakrabarti’s and the Jewish Labour Movement’s requests to appear and give evidence before it. Not a single woman was called to give oral evidence in public, and the report violates natural justice by criticising individuals without giving them a right to be heard.

“The report’s political framing and disproportionate emphasis on Labour risks undermining the positive and welcome recommendations made in it.

“Although the Committee heard evidence that 75 per cent of antisemitic incidents come from far right sources, and the report states there is no reliable evidence to suggest antisemitism is greater in Labour than other parties, much of the report focuses on the Labour party.

“As the report rightly acknowledges, politicising antisemitism – or using it as a weapon in controversies between and within political parties – does the struggle against it a disservice.

“Under my leadership, Labour has taken greater action against anti-Semitism than any other party, and will implement the measures recommended by the Chakrabarti report to ensure Labour is a welcoming environment for members of all our communities.”