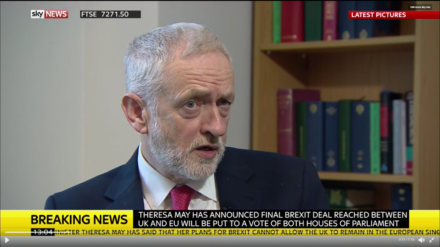 Labour is in turmoil over Brexit just as the Stoke Central and Copeland by-elections hove into view. As Steve Richards has pointed out, Labour has always been split on Europe – but more nimble leaders and the basis of a stronger Labour movement saw us through. This time it’s totally different.  Whatever your views on Jeremy Corbyn, he is no master of internal party management or parliamentary tactics.  But even if we could conjure up a Wilson or an Attlee now, it is doubtful how any leader could paper over the cracks of such a political, cultural and emotional divide between Brexit and Remainers that now runs through the PLP, the party and the country.

In the heat of the crisis you can see why the leadership is insisting, for now, on a three line whip on article 50. Labour, they feel, can’t be seen to be blocking Brexit ahead of Stoke and Copeland. The loss of one seat would be a disaster; the loss of both catastrophic. In their crisis the only thing that matters is surviving the day. But there will be more by-elections and parliamentary votes we don’t want and the implications of forcing Labour MPs to vote against their beliefs and their constituents will simply store up even more trouble, not least through more shadow cabinet resignations and grassroots revolts. So the bigger danger is that the party is just prolonging the agony of not knowing what way to face on Brexit. The way out will not be easy or quick but we have to find it.

Labour cannot be against Brexit but it must be against a hard Tory/Trump Brexit. The country has voted to leave, and leave it probably, but no one voted to commit economic, social and environmental suicide. The question now is how we look to leave on the best possible terms.  Labour throws away any parliamentary bargaining power to get to get the best deal by signalling in advance that it will vote for third reading on the article 50 come what may. Instead it should vote for second reading and push hard for amendments that enshrine workers’ rights and environmental standards. Then and only then should the leadership take a stance on third reading.  If the party feels it has helped win the best possible terms for Brexit then the leadership can say so. If not they should vote against and try and force the government to come back with a better deal. But no MP should be forced against their will to vote something they don’t believe in and could contribute to their electorate defeat. This is a moment for kinder and gentler politics – not the crack of the whip.

On this Jeremy can’t have it both ways. He can’t win the party leadership overwhelmingly, in part because he took positions based on his principles and defied the whip so often, only now to insist others do what he refused to do. And in all the debates we have to be really clear about our purpose, it is not to block Brexit but to avoid the madness of the worse possible Brexit. Labour is never going to “out Brexit” UKIP in Stoke or anywhere. It’s not just pointless trying, it pushes the debate further to the right. Of course the party must do everything it can to win the two by-elections but it can’t sacrifice either principle or its duty to be the Opposition in the process.

But even getting the by-elections right only gets us over the immediate hurdle. The big question is this – how can we reconcile the interests of the 52 per cent and the 48 per cent? Labour at its best has always been an alliance of the working class and the liberal middle class. That alliance is being stretched to breaking point by Brexit, a divide that lays on top of the structural and cultural weakness of the Labour movement, 30 years of neo-liberal economics, austerity, and decades of incessant right wing propaganda against Europe and immigrants that was never countered because the party never strong enough.

So while we manage the symptoms of the left’s crisis, particularly on Brexit, we have to start dealing with the causes, not least the separation of power – the ability to do things – from politics  – the decision about what to do – in a global economy that isn’t going to stop being global, Brexit or not. Here the fallacy of “socialism in one country” looms as does a refusal to see change coming and use it for our purposes.

We helped workers who were displaced in previous industrial revolutions and Labour has always been the party of modernity. In 1945, 1964 and 1997 it led the country because it owned the debate about the future. In moments of crisis people look down and in, just as they did in the 1930s and are doing now after 2008. But openness and globalisation will keep marching on – it’s the form it takes that matters. Our job is to lead a progressive way through it.

While we respect the past and build from it, our gaze must be fixed on a future determined by a growing middle class and a shrinking working class, a future dominated as ever by technology and by global and not just local forces.  Some want to take Labour back, others to blindly follow whatever a free market version of globalisation throws at us until a few swim but most sink.  Instead of warmed up Bennism or Blairism this is the moment to bend modernity to our values of equality and democracy.

Article 50, Brexit, these by-elections and the inevitable ones to come are the moments to speak to the country about the future society we want to see. To be heard we must be bold, clear and consistent.  Is that asking too much?