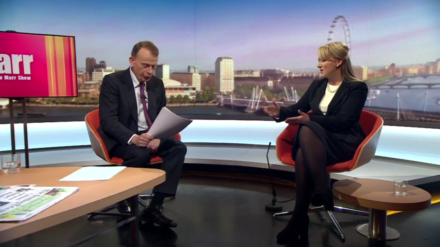 The words “fiscal credibility” do not set the heart racing but they are at the heart of every general election. They also represent a slow burning flame which occasionally flares into life between national votes.

Labour was reminded of this yesterday when, fewer than two years after seeing its hopes of a return to government crushed by a cruel and duplicitous Tory press machine, Rebecca Long-Bailey was grilled by Andrew Marr on his Sunday morning BBC show.

For those of who you who didn’t see it then you will not have to think too hard to imagine what happened. A seasoned political journalist read out a list of spending pledges served up by an opposition Labour Party and asked a frontbencher how they were going to pay for all of them. It is a familiar tactic and was one deployed repeatedly in the 18 months before the last election.

Marr recited around £63bn of Labour’s planned spending, which the shadow business secretary said was “broadly accurate” and then quoted BBC analysis of Labour plans to scrap Tory giveaways for big business and wealthy individuals, claimed the opposition was £30bn short and accused his interview of answering with a “meaningless overall figure”.

Long-Bailey stuck to her guns and insisted Labour could raise around £70bn from cancelling cuts to corporation tax, inheritance tax, capital gains and the bank levy.

For the shadow cabinet minister, promoted from opposing the chief secretary last year, it will have been an unhappy morning’s work. The headlines were blunt – forget the Daily Mail, even the Labour-supporting Mirror said Long-Bailey “struggled under grilling on Labour’s tax and spending plans” – and underlined a political truth of the last 30 years, that a left-wing opposition will always be attacked by a Tory government on spending. And that television news shows, even on the impartial BBC, still love a “gotcha!” moment.

There is a simple way to avoid getting skewered on this type of programme – and that is to carry round a piece of paper listing two things: firstly, all your party’s spending announcements, and, secondly, a small chart of the spending cuts, tax rises or other revenue raisers with which you would fund them. If it sounds boring, then it is, but getting through a live broadcast interview at a time when your team is polling badly is about 90 per cent perspiration and 10 per cent inspiration.

When I worked for a shadow cabinet minister, and stood as a parliamentary candidate, that single side of A4 accompanied me everywhere.

Long-Bailey is seen as a hard-working shadow cabinet member and, of the top Corbynistas, does not seem to provoke the ire of those on the centre-left in the manner of people like her former boss, John McDonnell. Her interview was not a “Chloe Smith moment” and will soon be forgotten. What it showed, however, is that Labour must be water-tight on spending.

This is not a political preference and the debate about whether Labour should promise to balance the books is too big to enter into here. What is clear is that Labour is behind a failing Tory government on economic trust. A poll last week – carried out after the new chancellor’s first, disastrous Budget – handed Philip Hammond and Theresa May a 31-point lead over McDonnell and Jeremy Corbyn on economic competence. And this was a survey carried out amid a backdrop over uncertainty over Brexit and a squeeze on wage growth which the Resolution Foundation think tank said was the largest since the Napoleonic Wars.

Yesterday afternoon Labour officials sent round a briefing note itemising out how the shadow Treasury team found its way to the headline number. “The £70bn is a conservative figure that comes from Labour research in consultation with the House of Commons Library”, a spokesperson added.

The challenge is, of course, much of the media and – if the polls are to be believed – many of the public have concerns about Labour spending. Economic credibility is hard-won and easily lost. Ed Miliband and Ed Balls spent much of the last parliament reining in the inclinations of shadow ministers who wanted to spend, and went into the general election promising to eliminate the current budget deficit, and to get the national debt falling within five years, before going down to a heavy deficit to a Tory duo of David Cameron and George Osborne who had missed all their key targets on the deficit and the public debt.

Fiscal credibility is a slow burner for Labour. Much of the media will pour fuel on to the fire at key moments in the electoral cycle. To win again we need to be able to fight our way through each and every interview.