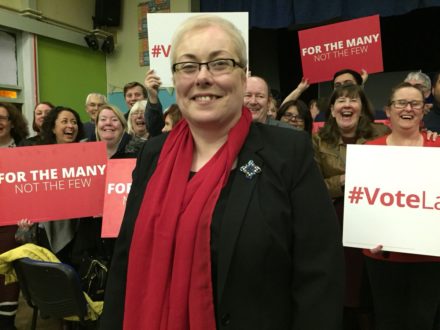 A Momentum-backed councillor has won by a landslide in the key target seat of Mansfield to become Labour’s next parliamentary candidate.

On Friday night, local councillor and Labour group leader Sonya Ward won the selection race on the first round, receiving over 50 per cent of the 286 votes cast at the meeting.

At the next election she will fight Mansfield, where sitting Tory MP Ben Bradley has a thin majority of just 1,057.

LabourList has learned the vote breakdown was as follows:

Ward was endorsed by grassroots group Momentum and supported by several members of the shadow cabinet. As reported on LabourList, she quickly became the frontrunner after Corbyn aide David Prescott did not make it onto the shortlist.

This weekend Labour activists will pour into Mansfield to knock on doors as Momentum’s Unseat campaign kicks off with Owen Jones.

Amazing news!! So chuffed for you – you’re going to make a brilliant inspiring MP and can’t wait to campaign with you! ✊