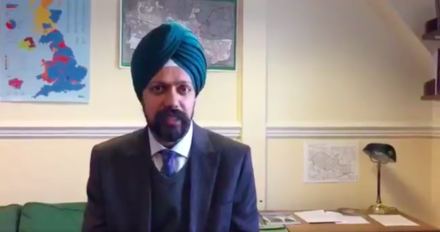 Labour MP Tan Dhesi says he was “disgusted” after a visitor to Parliament nearly had his turban pulled off by an unknown man who shouted “Muslim go back home”.

In a video posted on Twitter, the first turban-wearing Sikh MP said: ″I was disgusted that someone filled with such hatred tried to pull off the turban of one of my guests standing in the queue outside the British Parliament on Wednesday night.”

Dhesi and his guest spoke with the police after the attack, and he has asked them to review the CCTV footage.

“While consoling Ravneet, I actually felt embarrassed that he would be left with a personal scar from his visit, while also giving him a negative perception of our country,”Dhesi added.

“It has been pointed out previously on several occasions to the British government that their hate crime action plan totally ignores Sikhs.”

Dhesi calls for the Government to take further action and reveals in the video that he experienced a similar attack at school.

Someone filled with hatred tried to pull off turban of my guest standing in queue outside @UKParliament & shout “Muslim go back home”. They don’t realise importance of #turban for Sikhs. We need to work collectively to counter hate crime that’s been on the rise in our country: pic.twitter.com/sXGywLHHbB