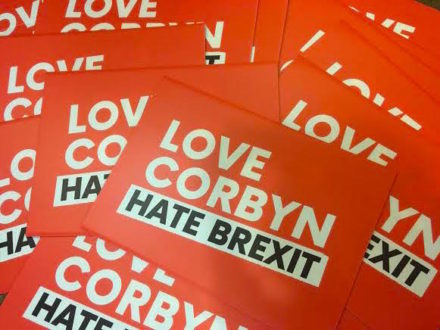 Momentum has begun consulting its members on Brexit. The survey, emailed out on Monday and live until November 1st, contains six multiple choice questions. Over the last few months, activist Alena Ivanova succeeded in getting over 6,000 people to sign her petition, and Momentum’s constitution allows for members to trigger a vote on a policy if 10% of the membership (which currently exceeds 40,000) calls for it. While the petition collected the required number of signatures by August, Momentum’s leadership only scheduled a consultation for now – too late to affect the outcome of Labour conference.

This summer saw an unprecedented grassroots push to shift party policy, with over 150 CLPs submitting policy proposals on Brexit – most of them calling for a public vote on the final deal, with an option to remain. While the loudest voices in the People’s Vote movement have been moderates, many of those pushing the motions in their local parties were Momentum activists. The slogan ‘Love Corbyn Hate Brexit’, seen on t-shirts, bags and stickers all over Liverpool, defined the mood of conference. But on a national level, Momentum remained silent.

The compromise composite motion united the party and allowed the leadership to continue with its electoral strategy: making the occasional nod to Remainers (as when Keir Starmer told conference that the option to remain was still on the table) while trying hard not to alienate Leave voters.

Meanwhile, the clock keeps ticking. By the end of March, the UK is set to leave the EU. What happens between now and then will affect Britain for decades to come. Far from being a middle-class issue affecting only those attached to their European identity and cheap holidays abroad, Brexit would hit the poorest communities hardest. It’s a threat to thousands of jobs, already provoking an exodus of EU staff from the NHS and causing uncertainty for countless of working class people, including migrants and their families. Quitting the EU would allow the Tories to roll back workers’ rights and environmental protections in the name of “cutting red tape”, and tie the hands of future governments with trade deals with President Trump and worse. And it would be a victory for the most dangerous forces in society – those who campaigned with billboards inspired by Nazi propaganda and caused the surge in hate crime that has only continued since 2016.

Some on the Labour left argue that what’s needed is not another vote but a general election. This is a false choice. No one in Labour would disagree that the country urgently needs a general election to end this shambles of a government, stop austerity plunging families into poverty and rescue our welfare state. However, under the Fixed-Term Parliaments Act, an election won’t happen without the Tories’ support. Our best chance of bringing down the government is voting down the deal, which could force May’s hand.

The question remains what manifesto Labour would fight the election on. Would it attempt to start the Brexit negotiations from scratch? Or would it be brave enough to put the question back to the people? There’s no such thing as a good Brexit deal. A hard Brexit would inevitably cost jobs, hit living standards and leave less money in the treasury for our spending promises. It would also mean a massive expansion of border controls, hardly something for which the most left-wing government in decades should be remembered. A soft Brexit – formally leaving the EU while staying in the EEA – would turn Britain into a vassal state, accepting the rules without a say over them. Instead, a Corbyn-led government inside the EU could serve as an inspiration for the European left and work with socialists across the continent to challenge both the neoliberal establishment and the rising far right.

Opinion polls show a national shift against Brexit as its consequences become clearer. Over 100 constituencies have already moved from Leave to Remain, and a large majority of those who changed their minds are Labour voters. Even many Leavers don’t see exiting the EU as their main priority: they are preoccupied with wages, housing and healthcare. To these concerns, Corbyn’s Labour has the answers. The left can only win by being loud and honest about what really caused the problems facing ordinary people – not immigration, as Brexiteers want us to believe, but years of austerity, decades of privatisation, deregulation and draconian anti-union laws.

The fight for the future of Britain in happening now. Momentum can’t let the anti-Brexit cause be owned by the old political establishment. It’s time for members to take things into our own hands: fill in the consultation and make sure our movement is on the right side of history.

Ana Oppenheim is a campaign organiser with Another Europe is Possible.

Ana Oppenheim is an organiser for the Labour Campaign for Free Movement.