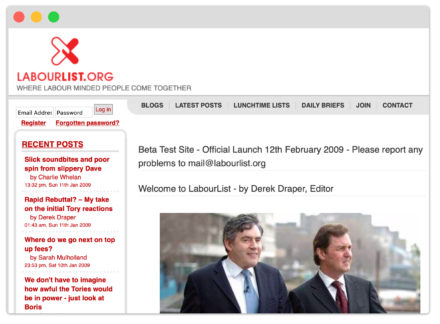 To mark the tenth anniversary of LabourList today, I’ve drawn up a list of the most popular comment pieces in each of the last ten years. Unsurprisingly, the articles with the highest number of page views are often penned by those who went on to become star writers – Laurie Penny and Owen Jones, for instance. Other well-read posts are frankly bizarre in retrospect (take a look at the top pick for 2012 as a prime example).

I’ve only selected opinion pieces here, but looking at the top news stories was interesting too. In 2016, by far the most read was ‘Leaked list ranks Labour MPs by “hostility” to Corbyn‘, when The Times published the infamous list allegedly drawn up by the leader’s office that categorised MPs as “core group”/”hostile group”/etc. Funny to see names such as Debbie Abrahams in “Core Group Plus” now, and allies such as Laura Pidcock, who had yet to join the PLP, missing from the “Core Group” list.

And, by a very long way, the most read post of all time is one from 2017: ‘Keir Starmer: Labour has six tests for Brexit – if they’re not met we won’t back the final deal in parliament‘. This one ranks well on Google, and it’s very handy for members, journalists and possibly the odd shadow cabinet member who needs a reminder of Labour’s six tests for any Brexit deal.

Hope you enjoy looking through the stories below, as I did.

Dear white straight guys: it’s not about you, Laurie Penny

No, really, listen up. I have been stunned this week by the cybersquall that has erupted over Rowenna Davis’ Guardian article, entitled – although not by her – ‘Stupid White Heterosexual Male’. The article was well written, reasonable, and managed to make points about equality without getting personal, which is unsurprising, as Rowenna Davis is at the tender age of 24 one of the finest and most ethical journalists I’ve ever had the privilege to meet.

It’s a tough gig to summarise the contribution of Beatrice Webb (1858-1943) to the Labour movement in a few words. A list of her accomplishments – some achieved alone, most achieved in partnership with her husband, Sidney – are formidable: the foundation of the London School of Economics, the intellectual relaunching of the Labour Party, the shaping of the Fabian Society, the creation of the New Statesman and the composition of a ‘blueprint’ for the National Health Service. At most, a short summary captures only the spirit of an extraordinary woman who was given the space and encouragement to flourish despite her Victorian birth.

It’s time to abolish Oxbridge. The idea of having two reigning monarchs of the university system, whose students are automatically regarded as being of a better quality than anywhere else, is completely anachronistic and has to go. Despite repeated – and noble – attempts, both universities remain the preserve of the wealthy and the privileged. Both are treated as the training ground for the next generation of the Establishment. What we could call the ‘Oxbridge system’ has to go.

Matt Zarb-Cousin is Not A Story. It’s a shame he must have had a bad day because of it. He didn’t deserve it and it’s a sad indictment of the political age we’re falling into. People in politics shouldn’t be interesting. They can’t anymore. Being unique might be nice at first, but eventually you have to conform, or you won’t get anywhere. Today Matt was strung up on a lamppost (very possibly the one next to Tom Harris), so everyone could see what happens to you when you dare to be different.

Better off on the relay team: 10 reasons why the EU is good for Britain, Alex Shattock

If Labour wants to fend off attacks from UKIP and the Conservatives at the next election, it has to make the case for Europe: both in the media, and on the doorsteps. In order to win the argument, Labour needs more than one answer to the question: “why should Britain stay in the EU?” Here are ten reasons why we’re better off in…

Lord Freud’s now notorious suggestion that disabled people were not “worth” the full minimum wage touched a nerve because they came from someone at the heart of a government that has a problem valuing and respecting disabled people. That’s why tomorrow, Labour will use an opposition day debate in parliament to call on the government to fundamentally change the way it treats disabled people, and to give the House of Commons an opportunity to distance itself from Lord Freud’s comments through a motion of no confidence.

1. Labour’s policy on the deficit didn’t make any sense.

How can you reconcile sending the whole of the Shadow Cabinet on a TUC march against austerity, and then signing up to Conservative spending plans 18 months later?

Maybe it was right to promise cuts and no increase in Government spending. Maybe it was right to go on the march and oppose austerity. But you can’t have your fiscal cake and eat it. Labour managed to convince deficit hawks that it was in favour of ballooning public spending. And it simultaneously managed to convince opponents of austerity that it was in favour of greater cuts.

We don’t have to abide by the referendum result if we believe Brexit will be a disaster for our country, Christian Wolmar

On Friday, I sent out a tweet, purely on impulse. It said that we, the Labour Party, must be the party of Remain. The response was, quite unexpectedly, tremendous, with hundreds of likes and retweets. The argument clearly has resonance.

We are living in perilous times. It is no exaggeration to say that the Labour Party is facing an existential threat. Our ability to deal with the issue of Brexit may well determine whether or not the party has a future.

We have nothing to lose – this is how we can beat Momentum, Luke Akehurst

We may well have reached “peak Momentum”. These are the most favourable political circumstances Labour’s hard left could envisage. They feel politically vindicated by the general election result, have a well-funded, well-staffed organisation holding a vast amount of data on Labour members and have reshaped Labour’s membership through successive rounds of mass recruitment.

I won’t vote for a Brexit deal that panders to the Irish government’s hypocrisy, Kate Hoey

During all my years as an MP, the interest shown by most of my colleagues in Northern Ireland has been minimal. The Labour Party even had to be taken to court by a trade unionist in Belfast before it finally allowed citizens of Northern Ireland to join. Even with over a thousand members there, the party still disallows Labour candidates to stand in elections. So it has been rather ironic that in the Brexit debate Labour MPs have been queuing up to mention Northern Ireland.