Thank you, Mr Deputy Speaker, for giving me the opportunity to make my maiden speech today. Let me start by giving my heartfelt thanks to the people of Coventry South for putting their faith in me: I am truly honoured and humbled to be their representative.

Let me also thank my predecessor, Jim Cunningham, for his service to the constituency. He served Coventry for 27 years, which means that he was an MP before I was even born. He has been a champion for the city, fighting for Coventry to get its fair share of regional investment, defending our industries, and speaking up for causes from the WASPI women to Rowan’s law. I know that Jim was renowned in the House for the frequency of his interventions. As the new member for Coventry South, I aim to continue that tradition, and I wish him well in his retirement.

As for Coventry, Mr Deputy Speaker, did you know that on several occasions the city has been the capital of England? As far back as 1404, Henry IV summoned a parliament in Coventry. Given that we will have to move out of this place for renovations, may I suggest that we take parliament back to Coventry to put power back in the midlands? It is a city fit for the prestige. From the beautiful cathedral to the 49 hectares of the beautiful war memorial park, Coventry South is a constituency of scenic beauty.

Coventry is a city of rich culture too, and I look forward to its hosting UK City of Culture 2021. It is a city with a history of challenging convention, of struggle, and of solidarity. From being home to two universities, as well as two-tone music—bands such as ‘The Selecter’ and ‘The Specials’ — to the founding of one of the first Indian workers’ association branches, it has been at the forefront of the arts, anti-racist organising and industrial militancy. From welcoming the Irish migrants in the ​1950s and 1960s who built the city’s booming car industry to housing the largest population of Syrian refugees in recent years, Coventry proudly continues to be a sanctuary for people in need of a place to call home.

I was just 14 when the global financial crisis struck and reckless bankers sent the economy into free fall. I was still a teenager when David Cameron and George Osborne began to implement their austerity agenda. Now, I know that the convention for maiden speeches is to avoid saying anything that members opposite will find very disagreeable, but I cannot do that, because my generation has only ever faced a future of rising rents, frozen wages and diminishing opportunities. For my whole adult life, I have only known Tory governments who wage war on working-class communities like mine, cutting our services, underfunding our schools and hospitals, and saddling me and my generation with tens of thousands of pounds of student debt.

The manufacturing jobs which were the backbone of Coventry, and which brought my family from Kashmir to the region, are now few and far between. The public libraries that allowed me to study and go to university are closed. The council houses that gave working- class families like mine access to safe, affordable homes have been sold off. While the vast majority have seen services cut and wages stagnate over the past decade, the super-rich have had their taxes cut and seen their incomes soar.

The gap between the ruling class and the working class has widened and is widening still, and the response from members opposite is, as it always has been, to divide and rule. That is what is happening when they compare Muslim women to bank robbers, when they call gay men “tank-topped bum boys”, and when they blame events such as the Hillsborough disaster on drunken fans. They are pitting our communities against each other. They are diverting attention away from the billionaires who fund their party, dodge their taxes and rig the economy.

I am a working-class Muslim woman and know that the Bullingdon boys will never be on my side or on the side of the shop stewards in Coventry, the cleaners in Carlisle, the migrant workers in Manchester or the teachers in Tottenham. My Muslim brothers and sisters, my Jewish comrades, my friends in the Gypsy, Traveller and Roma communities, and people of all faiths and none, are safer when we unite to defeat the far right, even as this government have given it new-found confidence. And I know that a government who abandon refugee children abroad will just as quickly abandon working class children in Britain, where one in three of them already live in poverty. This is a government of the few; it will never be for the many.

The prospect of five more years of this government is almost enough to make me despair, but my generation and I cannot afford to despair. If we do, by the time I reach middle age it will be too late, and the climate emergency will have become the climate catastrophe. I come here with a message from my generation and my constituents: we have no intention of letting that happen. We have seen Australia burn and Indonesia drown. We have seen our Earth teeter on the brink of ruin. We have heard the warnings of scientists. We know where the blame lies: it is with the 100 companies that are responsible for 70% of global pollution. It is with the billionaires who got rich polluting our rivers and pumping out carbon. It is with an economic system that puts the profits of the rich above the needs of the people.​

Make no mistake: the climate crisis is a capitalist crisis, and the climate struggle is a class struggle across borders. Whether you are in Coventry or Canberra, Doncaster or Delhi, if you are working class you will suffer the worst effects of floods, fires, droughts and devastation while the rich build ever-higher walls to protect themselves. That is what is coming unless we take bold action. That is what will happen unless we unite working people across borders to say that our lives are more important than anyone’s profits. It is what will happen unless we put the power in the hands of the working class to put people and planet first.

This is the urgent call of our times: an international green new deal to transition from disaster capitalism to a new society created on the principles of equality, freedom and justice, building green industries providing good unionised jobs, democratising our economy and eradicating poverty. That new society has an old name. It is a name that inspired past generations in the fight against mass unemployment, war and fascism. It is the name that people gave to a decent, liveable, healthy future on this planet. That name is socialism.

Ten years ago, I was sitting my GCSEs at school. I was a teenager, and I never dreamed that I would be here today. In ten years’ time, at the start of the next decade, I want to look teenagers in the eye and say with pride: “My generation faced 40 years of Thatcherism and we ended it. We faced rising racism and we defeated it. We faced a planet in peril and we saved it.” We have our work cut out, but together we can do it. 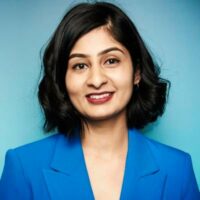