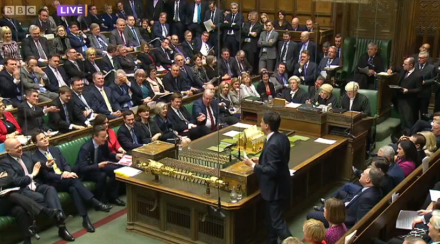 Opinion polling shows there has been no clear “Budget bounce” boost for the Tory Party, following Osborne’s economic statement to the House of Commons on Wednesday. While changes in the polls have been noted at previous Budget announcements, this week sees little change for either party: in some Labour lead, in some the Conservatives lead, and most are very, very close.

The Observer reports a Tory lift in their poll with Opinium today, leading Labour by three:

The Mail on Sunday’s poll with Survation sees the Tories close the gap on Labour’s lead, but only to four points:

The Sunday Times poll with YouGov shows a two point lead for Labour, after the Tories managed a small lead in Friday’s YouGov result:

And on Friday, Populus showed a three point Labour lead:

Of the four latest post-Budget polls, three show Labour leads – and there is a fairly solid average for Labour across all four, giving the party around 34%. The Tories’ support seems a little harder to place, and while two show a rise in support, two show it falling away. Their average comes around 32/33%, meaning Labour probably hold a lead of only one point or so against the Tories.

It also seems that Danny Alexander’s “Yellow Budget” for the Lib Dems on Thursday has not had an effect.