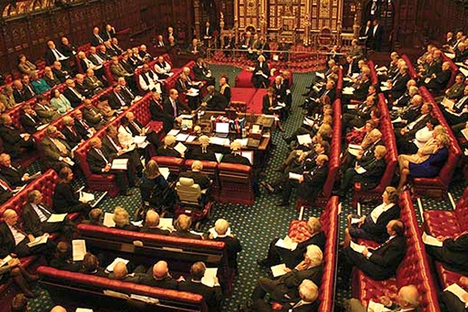 The Conservatives’ anti-trade union plans suffered a setback last night as they suffered a “resounding defeat” in House of Lords votes.

Peers voted against aspects of the Trade Union Bill that would see Labour’s funding take a serious hit, as well as stalling proposals to implement 50 per cent threshold on strike ballots until an independent review has considered electronic balloting, which the Tories oppose.

This comes after a leaked Government letter revealed that senior ministers were prepared to climbdown on parts of the bill, such as electronic balloting.

During the Lords votes last night an amendment was passed, by 320 to 172 votes, to weaken the part of the legislation that would require all trade union members to actively ‘opt-in’ to paying into a political fund. This would severely hit the unions’ ability to fund Labour, with the party predicting it could lose around £8 million a year from the changes.

In January, Labour and Lib Dem members of the House of Lords agreed to work together to oppose these reforms, following a decades-long agreement that major changes to party funding must have cross-party support. Both parties voted for the amendment last night, as well as crossbench peers and two Tory rebels.

Labour’s leader in the Lords, Baroness Angela Smith, said that the latest defeat shows that the Tories had failed to make the case for the legislation, which will now go back to the House of Commons to be debated.

“This resounding defeat at the hands of Peers from all sides shows just how poor the Government has been in making its case for ‘opt-in’ and an overhaul of the trade union political fund,” she said.

“Ministers should rethink their opposition to the recommendations made by Lord Burns’ cross-party Committee. Those proposals would certainly not be pain-free for the Labour Party but they suggest a proportionate, reasonable and practical compromise. A compromise that would allow the government to fulfil its manifesto commitment without placing unrealistic demands on the trade union movement.”

The Tory move to ban trade unions from using electronic ballots for strike action also suffered a blow, as 320 to 181 peers voted in favour of an amendment to begin an independent review into how online voting could be carried out.