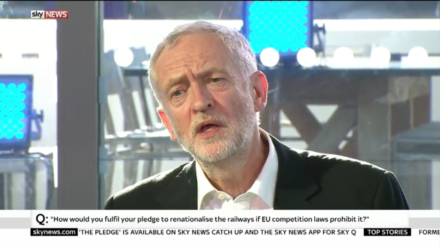 There was no fake fur coat on this occasion and no Bentley. There was, however, another young crowd ready to question the Labour leader.

Jeremy Corbyn’s Sky News special on the EU was very different to the bantering of last big television outing, on the late night Last Leg show.  Then, the atmosphere was loud with the audience apparently fuelled by a few drinks. Tonight the only hard stuff on offer was policy.

And this crowd of under-35s seemed to have drunk heavily from well the well of euroscepticism. The Q&A, hosted by Faisal Islam, featured some hard questions on migrant workers, low pay and the enduring mystery of Corbyn’s own enthusiasm for the EU.

But the Labour leader withstood the probing and, when pushed if he would “shoulder some of the blame” if Britain votes Out, gave a solid defence of his Remain position that was blunt and realistic rather than being starry-eyed.

“I am not going to take blame for peoples’ decision. There will be a decision made on Thursday. I am hoping there is going to be a Remain vote….

“Whatever the result that is the result of the referendum, we have got to work with it. Whatever the result we have got to work with it. I would say to the EU. I want to see better working conditions across Europe. I want to see better environmental protections across Europe. We all suffer from these things. I want to see a trade policy that doesn’t export pollution by importing goods that have been made in a deeply pollutive way. I will be pursuing the exactly the same agenda on Friday morning that I put to you tonight… [but] it is much harder if we leave.”

This, perhaps, was the punchy plea to stay for which many had been waiting. His campaigning on the EU has been to keep faith with the bloc, “warts and all”, and has led some in the PLP to speculate that he is a reluctant Remainer. During countless speeches and campaign events in the last few weeks, we didn’t see much of the impassioned rhetoric which swept him to landslide win in the Labour leadership election.

Tonight he hit his stride, particularly towards the end. He survived a few early googlies that highlighted his previous parliamentary votes against the Lisbon Treaty in 2008 and the Maastricht Treaty in 1992, as well as to leave the European Economic Community in 1975.

Corbyn was prepped and mounted a strong defence, saying he voted against a Thatcherite “freemarket Europe” when the Maastricht Bill went through Westminster. He went on to make a strong case for a “Europe of solidarity” based on publicly-owned railways, tackling climate change and stronger action to deal with the “humanitarian crisis” of the influx of refugees to Europe.

This are the issues that have persuaded the Labour leader to back an In vote. Yes, we know we had a series of criticisms about the democratic deficit in the EU previously – but so have many other people. The EU is not an icon of democracy that we should imitate, it is an institution that many Britons, from Corbyn to David Cameron, want to reform.

Would it not just be easier to leave, asked one blunt voice from the audience. The shortest questions are often the best.

“No, because the problems would be economic,” Corbyn said. Around half of Britain’s overseas trade goes to the EU, he reminded us.

There was more, much more, from an audience that zoned in on economic and social policy and avoided the “take back control” mantras, the simplicity of which sounds attractive, but can be misleading. The questions took Corbyn on to policy areas where his view his well-defined, and where he is well honed at expressing it: protecting workers’ rights, tackling employment agencies who recruit solely from abroad and, of course, opposition to TTIP because of the powers it hands to big business. It was on this last point that he had a decent line about the difficulties of enforcing a cleaner climate from outside the EU, saying “you can’t deal with pollution behind a national frontier.”

It was a tough gig on a tough day but Corbyn negotiated his way through the session with comfort. It was a day over which the terrible tragedy of last Thursday had cast a long shadow. Earlier this afternoon Corbyn had been among those leading the tributes to Jo Cox in the House of Commons. That, perhaps, was the real challenge: speaking for a party and a nation distraught by the loss of such a bright talent.  Tonight he calmed the nerves of Remain colleagues and issued a few sober warnings about the impact of Brexit. It wasn’t a day for hyperbole but here, on an immensely sombre day, was a serious case to vote In.