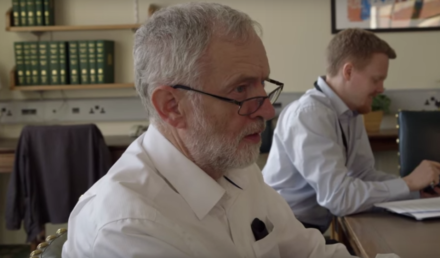 Jeremy Corbyn today attempts to move on from the Labour leadership crisis by using the Chilcot report as more evidence of the “political sea-change” which propelled him to the top of the party.

Corbyn said the findings of the Iraq Inquiry showed the “political establishment got it disastrously wrong” and drew a link with his landslide victory in the Labour leadership contest last summer. He also re-stated his intention to see off any challenger.

Speaking after the party confirmed a huge spike in membership, attracting 128,000 people in the two weeks since the EU referendum, Corbyn called on rebel MPs to “respect the democracy of our party”.

“Politics has changed for good. After years of disastrous wars, ballooning inequality and a failing political elite, there can be no more business as usual”, Corbyn said in a Guardian article.

“The damning verdict of the Chilcot report on the Iraq war confirmed that while the political establishment got it disastrously wrong, the majority of our people called it right. This political sea-change is also what led to my own election nine months ago, by 60 per cent of Labour members and supporters.”

Corbyn penned the article hours after Owen Smith, one of those thought likely to challenge the leader, called for more time for talks to resolve the impasse around the leadership and stave off the prospect of a Labour split.

Smith, the former shadow Work and Pensions Secretary, seemed to step back from the brink when he said had been assured by Len McCluskey that talks between the Unite boss, Corbyn, and deputy leader Tom Watson had been “productive”.

The role of Smith and Angela Eagle, who has publicly threatened to run against Corbyn, is being hotly debated among rebel backbenchers. Both former shadow Cabinet ministers have the 51 signatures from MPs necessary to trigger a challenge but much of the parliamentary party believes there can only be one candidate to oppose Corbyn. It now appears possible MPs could even hold an informal hustings to choose which of Smith and Eagle would run against the party leader.