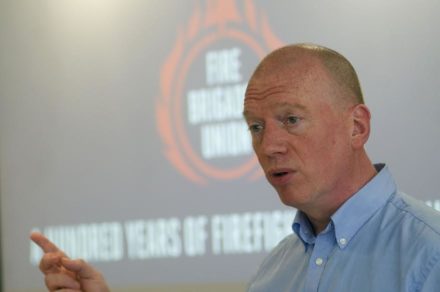 Our Tory anti-union laws represent one of the foremost constraints preventing working-class people from winning better conditions at work and making gains in wider politics. That’s why at this year’s Labour Party conference I’ll be speaking at a fringe meeting organised by The Clarion magazine that focuses on Labour and the vital question of anti-trade union laws.

The FBU works hard to maximise our turnout and vote in ballots, most recently demonstrated by the magnificent 9-1 vote for action in the West Midlands, which halted the introduction of exploitative contracts for new firefighters. But we know meeting draconian anti-union limits is hard. Our sisters and brothers in PCS have just fallen foul of the thresholds for strike action introduced by the Trade Union Act, denied the right to strike despite a very impressive 51,000 workers – over 85% of those voting – casting their vote for action.

The Trade Union Act 2016 was only the latest in a long line of laws designed by the Tories to undermine the power and organising ability of workers and our unions, by making most forms of industrial action illegal. Jeremy Corbyn and John McDonnell’s clear commitment to repeal the Trade Union Act in their first 100 days in office is very welcome. But repealing that piece of legislation and returning us to 2015 would still leave the vast bulk of anti-trade union laws in place. We need all these laws scrapped, replaced with positive legal rights that facilitate workers organising and taking action.

The new restrictions since 2016 are indeed extremely damaging because they make it even harder for many disputes and campaigns to get off the ground. But to revive on a wide scale, the trade union movement will need to use creative and dynamic forms of struggle – for instance solidarity action and mobile pickets – which the older anti-union laws ban outright.

The fact that these laws were maintained virtually unamended through 13 years of the last Labour government should be a source of great concern for our movement. It meant unions missed an open opportunity to rebuild our strength and entered the capitalist economic crisis since 2008 in a weakened state. The transformation of the Labour Party and the prospect of a Corbyn government gives us a fresh opportunity to get anti-union legislation off workers’ backs – but only if we ensure that this time Labour is solidly and publicly committed to a clear policy of repealing them and replacing them with positive workers’ rights.

Labour members are clearly supportive of this stance. In addition to the excellent work many local parties have done to support strikes and union campaigns in the last three years, the 2015 Labour conference voted unanimously for a composite motion that included a commitment to “legislate for strong rights to unionise, win recognition and collective bargaining, strike, picket and take solidarity action”. The 2017 conference also voted unanimously to demand “an effective right to strike” through repeal of not just the Trade Union Act but also the “anti-union law introduced in the 1980s and ’90s”.

For Jeremy Corbyn, a longstanding friend of the trade union movement, supporter of workers’ struggles and a firm advocate of democratic policy-making in the party, putting these motions into practice makes perfect sense. The FBU, which has backed Corbyn from the beginning and reaffiliated to Labour, has clear policy on the anti-union laws. We believe a strengthened labour movement, unshackled so that it can genuinely fight for workers’ interests, is essential not just to reverse decades of rising insecurity and inequality, but to the wider success of a radical Labour government.

We owe it to the new generation of workers entering our movement and the struggle, whether in established union strongholds like the fire and rescue service, ‘gig economy’ employers like Deliveroo and Uber, or precarious workplaces like McDonald’s, Picturehouse and TGI Fridays, to ensure these anti-worker laws are swept away as soon as possible – all of them.

The Clarion fringe meeting on Labour and the anti-union laws, with Matt and other speakers, is at 7pm on Sunday 23rd September, at The Liverpool, 14 James Street. For more information, see here.

Matt Wrack is general secretary of the Fire Brigades Union.

View all articles by Matt Wrack