I am pleased to stand here, and feel humbled, to make my maiden speech as the new MP for the area that I have called home all my life. I want to thank the constituents in Vauxhall for voting for me and placing their trust in me. My predecessor represented Vauxhall for 30 years.

As many right hon. and hon. members in this House will know, she was one of the most vocal supporters of Brexit. But Kate was much more than just a vocal Brexiteer — she was a diligent, hard-working constituency MP who fought very hard for her constituents. I hope to build on her work locally and I pledge to represent the residents of Vauxhall to the best of my ability.

My constituency is home to a diverse community. Across our schools in Vauxhall, including my old primary school of St Helen’s in Brixton, there are over 50 languages spoken by children of migrants from all parts of the world who have made this area their home. We have vibrant Portuguese, Jamaican, Ghanaian, Ecuadorian and Italian communities who run a number of small businesses and restaurants in the area.

Vauxhall also has a proud history of an active LGBTQ community. I would like to place on the record my thanks for the contribution of the Royal Vauxhall Tavern in supporting and providing a safe space for our friends there. I am also proud to highlight the work of the 1997 Labour government, who broke the Thatcherite legacy that hurt so many men and women in Vauxhall so badly through section 28.

My constituency also has many famous national landmarks and buildings, including ​the London Eye, the National Theatre, the Young Vic, the Southbank Centre, the Kia Oval cricket ground, and the home of MI6.

I am pleased to be making my maiden speech today in this part of the debate on the queen’s speech because, like many hon. members in this House, health and social care is very close to my heart. My late mother suffered from a disease called sickle cell anaemia, and in later life she developed renal failure and had to attend dialysis three times a week.

The average life expectancy for sickle patients is between 42 and 47 years old, and many experience complications with childbirth. My mother was a fighter and she instilled in my sisters and me the values of standing up for what you believe in.

My mother also taught me how to make jollof rice. For any of you who have not tasted that, I want to put on the record now that Nigerian jollof rice is the best. As a young girl, I would watch my mother in pain going through a sickle crisis.

But somehow she would still find the strength to help my sisters and me get ready for school and support us with our homework. I know the real value of the NHS. Without the amazing care of the haematology and renal team at King’s College Hospital, and my mother’s faith in God, she would not have lived to the age of 60.

St Thomas’s Hospital in my constituency is also close to my heart. I never imagined that almost five years to the day, as I was literally pacing up and down the maternity ward, looking over the river, trying to coerce my daughter to come out, I would now be sat in this parliament fighting for funding for our hard-working doctors and nurses.

The NHS is struggling to cope with the increase in demand for health and social care. The A&E department at St Thomas’s is treating more patients than ever before. Attendance has risen by two thirds since 2018. The staff are now seeing 600 patients on their busiest days compared with an average of 420 when the new emergency department opened in 2018. So what is driving this increase?

A significant number of patients are presenting with serious mental health problems, there is a high number of homeless people with complex health needs, and the number of children attending the Evelina Hospital A&E continues to rise. In November and December, it had a record attendance, with 130 children seen in one single day—more than double the number seen in four years.

With an ageing population and more complex needs adding so many cost pressures to the budgets, I hope that this government will make sure that increasing funding to the NHS is a top priority. That is why I will be voting to support Labour’s amendment later this afternoon.

I got involved in politics to give a voice to people who feel that politics is not for them or that politics does not matter. I have spent a large part of my career working with young people, including the young people who society is quick to demonise and stereotype. Last Tuesday, I was one of the first people on the scene following a stabbing incident that took place just over the border of my constituency.

We cannot allow ourselves to become desensitised to the ​issue of knife crime. Young people in my constituency are being groomed for violence, and there has been an increase in fatal stabbings over recent years.

I firmly believe that, to tackle this issue, we need to understand the root causes of the problem. Evidence from various commissions – including the recent work led by the MPs for Croydon Central and for Lewisham, Deptford – show that the vast majority of young people involved in knife crime have suffered childhood trauma.

And I will continue to champion and speak up for the young women and girls who are facing sexual exploitation. The people of Vauxhall have placed their trust in me, and I pledge to represent their interests and concerns to the best of my ability for as long as I am in this House. 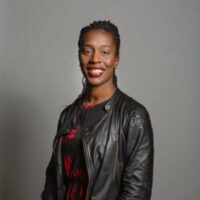