May’s local election results were a mixed bag for Labour. They showed what our party can achieve in local government when we have a positive offer and support from councillors and local members. In Worthing, for example, we have seen the council turn Labour for the first time ever thanks to an enthusiastic activist base, a progressive manifesto and a united local party. Meanwhile, in other councils such as Westminster and Wandsworth we have seen landmark Labour gains due to years of effort and hard work by local activists, councillors and candidates engaging with local communities and developing local alternatives to Tory rule for the few.

But in too many other parts of the country Labour stood still or went backwards. We lost key councils and mayoralties across the country and failed to make significant net advances from the results in 2018. In particular, we have seen a disturbing loss of support amongst some core voters, including Muslim voters, who have become increasingly alienated, as shown by evidence compiled by the Labour Muslim Network. Part of the problem is a tendency to reduce local elections to a test of the popularity of the national leadership, leading to the promotion of national level talking points rather than explaining to voters the things Labour councils can actually achieve. This does a disservice to our hardworking councillors and undermines the efforts of progressive councils to protect and empower working-class residents in the here and now.

Despite austerity and the Tory government, what local councils do can have a big impact. So much has been achieved by progressive local governments in places like Preston, Salford and Islington, who have successfully implemented policies aimed at meeting people’s needs and retaining wealth in local communities, rather than generating private profit: by bringing services in house, building council homes at council rents and community wealth building.

Sadly, these achievements have been actively ignored by the national leadership, in spite of the social and electoral gains that have gone with them. To be truly transformative, insourcing, providing council housing and community wealth building require support from the national party and ultimately from government policy – and that’s where the national executive committee (NEC) comes in.

Matt White and I are standing to represent Labour’s public officer holders on the NEC because we believe that turning round our fortunes in local government requires a change of approach. If elected to the NEC, we will use our role as local government representatives in the Clause V manifesto meeting to demand that the Labour Party adopts policies enabling local authorities to deliver for working-class people through greater public funding, increased powers to build council housing and redistributive taxation.

And we would push for other changes in the way our party operates too. We would ensure that the rulebook is adhered to and oppose undemocratic stitch ups like those seen in recent parliamentary selections for Wakefield and Stroud. It simply isn’t right that hardworking local councillors, let alone council leaders and deputy leaders, are blocked from standing in parliamentary selections by the central party for spurious reasons. We also need to allow local parties to get on with the job of running local government selection processes, without the heavy-handed, top-down interventions we have seen in the last two years.

We would support constitutional changes preventing commercial lobbyists or property developers from becoming councillors in order to strengthen confidence in Labour councils and send out a clear message that we will stand with our communities against the interests of property developers. We would also make sure that backbench councillors have proper representation on the NEC. On too many councils, power is concentrated at the top with backbench councillors having minimal say.

We have the experience and commitment to represent Labour’s public office holders. Matt campaigned successfully against the appalling Haringey development vehicle – a plan to privatise land and demolish council homes – and since becoming elected as a Labour councillor in 2018 has worked collaboratively with colleagues to radically change Haringey’s approach: replacing privatisation with insourcing and the construction of council homes at council rents. I have been involved in campaigns highlighting taxi driver abuse, working with trade unions and drivers to expose the appalling exploitation suffered by those in the service industry.

We support community wealth building, building council houses at council rents and real respect for council workers, we oppose racism and all forms of discrimination, and we back a green new deal for our communities locally. We are proud to have the backing of Momentum and the Socialist Campaign Group of Labour Councillors. We are on the ballot, and we ask for your vote when ballots go out soon – please check our website to stay updated, and to learn more about what we stand for. Please vote for Aneesa Akbar and Matt White. 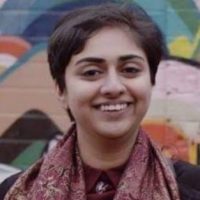 View all articles by Aneesa Akbar