The SNP says you can’t risk voting Labour in this general election because it will “let the Tories in the backdoor”. We have hit peak delusion. Then again, if I were representing a party that had seven seats held with less than a 1,000-vote majority over the Labour Party, I’d probably try my luck with a bogus claim too.

Unbelievably, it feels as if we have to remind people that the SNP can’t win this general election. They can’t stop the Tories, except in potentially a dribbling of seats in the North East, which they lost to them in 2017 where they read the room totally wrong in regards to Brexit. Any vote for them needs to be seen for what it is – a protest vote, nothing more.

I understand for some people that’s exactly the kind of vote they want to cast, and I expect fervent Nationalists to turn out for them as they always do. But most people want to see things finally start to improve in Scotland, and the only way that can be achieved in this general election is through bringing this chaotic, far-right populist Tory government to its knees. The way to do that is simple: you vote Labour.

As predicted, for the third election in a row, we are being faced with the pony’s one trick – the vacuous noise around a potential ‘deal’ between the SNP and Jeremy Corbyn’s Labour. This won the election in itself for the SNP and the Tories in 2015 when The Sun was able to simultaneously support an SNP vote in Scotland and a Tory vote in England on the same day, with people overlooking the direct and obvious intention of Rupert Murdoch’s mouthpiece.

The image of Alex Salmond with Ed Miliband in his pocket ushered in a Conservative majority for the first time in a generation when they had absolutely no right to have one after five years of the austerity coalition. You can understand, then, why they’re eager to play this card again. But let’s be clear – there is no deal. And let’s also be realistic about what happens if the SNP do call an independence referendum.

Firstly, they’ll need five or six polls consecutively telling them they’re going to win it. If Corbyn were to win the election, the odds of them getting that kind of arithmetic aren’t great. It is massively unlikely that the Left in Scotland will turn its back on its first representative government in decades. The SNP will not take the decision to hold this referendum this lightly, as they are well aware that a second defeat really would scupper their prospects for a considerable period of time.

Secondly, we have Boris Johnson giving ‘cast-iron’ pledges about not allowing an independence referendum. His words ordinarily mean nothing anyway, but here he’s completely blowing hot air. Irregardless of your views on the subject, the reality is that if a democratically elected government in Holyrood elected on a manifesto that explicitly included a referendum go to Westminster and ask to have that referendum, the consequences of saying ‘no’ could be absolutely seismic.

It would risk a Catalonia situation, and that would benefit absolutely nobody. With the chaos of Brexit sure to be in full swing in the event (god forbid) of a Johnson victory, the UK would seek to prevent further unrest.

Not to mention the arithmetic we talked about just there – if Johnson wins, Scotland’s Left would be presented with an absolute fool’s choice: a far-right Tory-led UK, or an isolated, neoliberal Scotland. The numbers that came out to support the No vote in 2014 in the hope of securing a Labour government, will not appear again. Many will abstain and some will even vote Yes to be free of Johnson’s borderline tyranny.

If the Left sees Corbyn lose this election and resign, it will leave them disillusioned, with nowhere else to turn. Ultimately, a Johnson victory will secure the swing the SNP has been longing for and give them the numbers to win a referendum. At this point, it actually will become ‘Scotland’s will’ rather than Nicola Sturgeon’s inane yearly rambling at conference.

Johnson has already sold Northern Ireland down the river to enable him to strike a rotten deal with the EU to deliver Brexit. If he wins, it won’t be stability or security for the UK, but the end of it.

There is another aspect of this situation that we should look at closely. It is reported that Corbyn and Sturgeon have already done a deal, but Sturgeon said at her manifesto launch that if Corbyn isn’t going to allow a second referendum, he shouldn’t bother picking up the phone. We can conclude that there is no deal in place – and also raise the question of what happens if Corbyn doesn’t bother to pick up the phone.

Is the SNP saying that if he doesn’t guarantee them a referendum that they will refuse to co-operate, instead creating the space for the Conservatives to form a minority government? I suppose they’ve already served a coalition with them in Holyrood for four years between 2007 and 2011.

A vote for Labour is the real vote for a truly, transformative government that can tackle unemployment, poverty in and out of work, homelessness and end the brutal austerity that has sent our country backwards for so many years under the Conservatives. It’s a vote for a Green New Deal and a new working relationship. It’s a vote for public ownership of public services, which will see our communities and our nations flourish and reverse the tide of adversity caused by consecutive Tory failures.

It is not a backdoor route to Conservative rule, as the SNP wants you to believe. The best way to stop Boris Johnson is to back the only party that can remove him from power on December 12th. That isn’t the Nationalists, nor is it Jo Swinson (who is the only person that believes that Jo Swinson can be Prime Minister) and her Liberal Democrats – it’s the Labour Party. 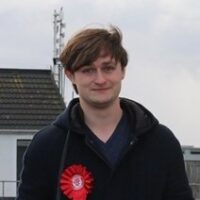 Cameron Gilmore is Labour's candidate in North Ayrshire and Arran at the 2019 general election.

View all articles by Cameron Gilmore