Even with massive state intervention, the long-term economic impact of Covid-19 will be profound. Once furlough ends, many jobs simply won’t exist and many of those who return to a job will face attacks on their terms and conditions. Personal debt has piled up and tenants are being threatened with eviction, while the spectre of even more public-sector cuts hang over the future.

From the very start of the crisis, trade unionists up and down the country have been fighting to make sure the risks and costs of the pandemic do not fall on working people. As a branch secretary for the National Education Union – and as a member of its national executive – I am proud of how my union has stepped up with a constant public presence and momentous national organising work, which included one of the biggest zoom meetings ever with 20,000 members taking part.

The real strength of our union has been in the workplace, with a huge increase in the number of school reps and the level of work they are doing. Supporting new reps to carry out detailed negotiations with management on opening plans, then supporting them to feedback via online meetings with members, has been a powerful reminder that if given the tools and backing our rank and file members are every bit as effective and important as our general secretaries.

This level of organisation allowed us to delay the reopening of schools and has undoubtedly made schools safer. But we now need to be looking at how we use this strength going forward to defend our schools against further austerity, and against the neoliberal inspection, testing, pay and privatisation regime that blights our education system.

In education, we are fairly strong. But others are less lucky – and with multiple crises looming, we are about to witness a series of struggles across multiple arenas over the future of our society. The whole labour movement knows the real fight is ahead of us. So my first thought as a trade unionist standing to be on Momentum’s national coordinating group is: what role should Momentum play in supporting the labour movement?

As the Labour left’s largest organisation, with nearly 30,000 members and proven mobilisation skills, Momentum can be a vital ally to the labour movement in the struggles ahead. And with a radical Labour government a far-off prospect, this could not be more important.

Many Momentum members are already active in their unions, and over the last few years Momentum groups and Momentum-led Constituency Labour Parties (CLPs) across the country have supported strikes and helped generate wider community support for them. There needs to be a much more strategic approach to coordinating and amplifying this work, as well as a drive for Momentum members to become workplace organisers themselves.

That is why early on in our campaign Forward Momentum convened a working group of trade unionists from across the country. Drawing on the ideas of thousands who took part in discussion meetings instigated by our campaign, we began to flesh out a vision for Momentum as a supportive ally for rank and file trade unionists.

At the heart of this vision is our proposal for a ‘Momentum trade unionists network’, which will have a full-time, elected officer tasked with its growth and coordination with unions – at both the local and national level. The role of the network will be to encourage Momentum and Labour members to join unions and become active workplace organisers. It will function as a forum for skills-sharing, learning, and the coordination of support and solidarity across the country.

This is not about organising Momentum as a ‘faction’ within unions, but we do want to link Momentum members up with those in their own union that are seeking to build member-led, fighting organisations. Forward Momentum’s central argument is that local Momentum groups – as well as organising in Labour and campaigning in elections – should be collaborating with trade, community and tenants’ unions to build working-class power and grow deep-rooted support for socialism.

I know from experience that successful workplace organising is tough. But if we are to build power and confidence in our movement, we cannot shirk this hard work. I also know that having Labour working alongside unions on campaigns can be very effective. I have found, particularly in several successful campaigns to stop the academisation of schools in my area, that when Labour supports and helps unions win for the community, the community will be more likely to support Labour come election time.

This is how we at Forward Momentum see Momentum’s role in relation to the labour movement: as an ally and as a machine for amplifying the impact of trade union struggle, helping Labour members into the unions and pushing the party to stand alongside union members. We are the only campaign in this election that has actually put together concrete proposals for achieving these objects, and if elected this is what we’ll deliver.

After these NCG elections, Momentum needs to hit the ground running – organising nationally to demand a socially just and green response to Covid-19, which we’ve committed to as part of our detailed five-point plan for Momentum. This means throwing Momentum’s full weight behind trade unions, renters’ unions and community organisations fighting to defend services, prevent redundancies, provide mutual aid, resist evictions, and calling for immediate policy change from the government. If it is to stay relevant, Momentum must engage in this vital work, and push Labour to do so too. We cannot risk another lost decade, and the further immiseration of working class communities. 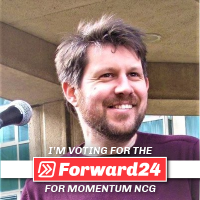 Phil Clarke is a teacher, branch secretary of East Sussex NEU and a member of the NEU executive committee.

View all articles by Phil Clarke