At every election, big or small, people say: “This is the most important election.” Often this can be hyperbolic. But this year’s Young Labour election is the most important for Scottish members because our belief in devolution and its importance is on the line. In casting your vote for Scotland representative this year, you will also be electing the chair of Scottish Young Labour. These two roles were combined at the 2019 Labour conference, tucked away in a pile of democracy review changes, without the express approval of Scottish members, and without many even knowing that it was happening.

Devolution has had 20 years to be understood and respected, yet decisions affecting people here in Scotland are still being made by members in the South. In fact, many only realised this year’s Young Labour election was a two-for-the-price-of-one special after I launched my campaign. Even members of the current Scottish Young Labour leadership and Labour’s Scottish executive committee were unaware of the change. Regardless of your thoughts on the rule change and whether there is an argument for the roles being combined or not, what young Scottish Labour members should be asking themselves is: “how can we ensure that decisions about us are never made without us again?”.

That’s why I’m standing to be Scotland representative and chair of Scottish Young Labour. I was encouraged to stand for many reasons, but the tipping point for me was realising that we in Scotland need someone who is prepared to fight our corner every step of the way. To put Scotland on the map, and ensure Scottish Labour is at the heart of decisions at a UK level. We will never win a general election if we do not win back Scotland – and if young members are the future, as much as we are the present, we need to organise now and be the leaders of our movement.

I want to redefine the purpose of the Scotland representative role and ensure young members have someone willing to defend devolution and fight for Scottish Young Labour’s autonomy, whilst working collaboratively with the UK committee on campaigns, influencing and challenging the leadership. But, of course, my ambition goes much further than that. I have a plan if elected as Chair of Scottish Young Labour, too. As a queer disabled woman I am – like many other young people – feeling the brunt of austerity, insufficient mental health funding, insecure work and exploitative landlords.

For too long, our youth wing has been a playground for factional battles, undemocratic endorsements and a toxic comms operation. In doing so, it has missed out on opportunities to lead on campaigns. Where, for example, was Scottish Young Labour when young people in Scotland were scapegoated by the government over rising coronavirus cases? Young members in Scotland are frustrated, and rightly so. We have a membership that is brimming with talented and energetic socialists, who are organising on their campuses, in their workplaces and within their local communities. We need a youth wing that supports and uplifts them.

I do not want to manage Scottish Young Labour – I want to lead a wholesale reformation of it. I have a bold plan to make this happen. It’s easy to repeat the usual tag lines of ‘socialism’, ‘democracy’ and ‘transparency’. Whilst all these remain important, I’m bringing an actionable plan to the table. My five key ideas are as follows:

It’s this agenda that is going to push Scottish Young Labour off Twitter and into our communities. It’s a strong plan that is going to democratise our youth wing, increase engagement and make us present in every region across Scotland. A leadership for young members that will be organised, passionate and determined to fight in the 2021 Holyrood election – and win.

Next year, we will be well and truly in the fight of our lives. Richard Leonard and the party have a transformative agenda for Scotland, and our youth wing needs to be ready to rally behind them. I can see what our movement is capable of, and I know that in the face of Covid-19 ripping our communities apart now more than ever we need a youth wing that is not just active but leading the fight for a fairer society.

Young members know more than anyone that under the SNP and Tory governments we have fewer secure jobs and less secure housing. Young members know better than anyone how to use online platforms and fight for social justice there. Young members are not just the future of this movement, they are the organisers of today and if elected I will be a champion of and for them. At this crucial time in our party, I am asking you to vote Elsie Greenwood for Scotland representative. 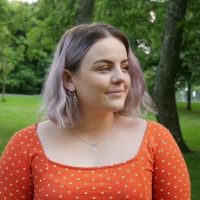 Elsie Greenwood is co-chair of LGBT+ Labour Scotland and is running to be Young Labour's Scotland Representative.

View all articles by Elsie Greenwood